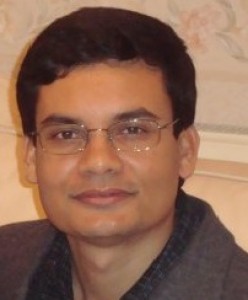 Dr Shaheed obtained his PhD from the Department of Automatic Control and Systems Engineering, University of Sheffield, UK in the field of intelligent control of flexible robotic arm. He then joined the School of Engineering and Materials Science (SEMS), Queen Mary University of London as a lecturer (Assistant Professor) where he is at present serving as a Reader. He has published over eighty peer-reviewed research articles in highly esteemed journals and conference proceedings in the areas of his research (details are in the research section).

Dr Shaheed's team won the Engagement and Enterprise Award under the Proof of Concept award category. This award is for the proof of concept project which has achieved one or a number of milestones that could lead to a significant commercial or non-commercial enterprise in the future. The QMUL team in a joint collaboration co-led by Dr Shaheed, a robotics scientist from SEMS and Dr Mo Thaha, a bowel cancer surgeon from SMD, Blizard institute has developed the first prototype of a novel locomotion system for a Robotic Active Capsule Endoscope. The prototype system when steered through a phantom colon, achieved speeds faster than existing CE, could be steered and controlled from the outside. Previously the team also won Queen Mary Innovation Award and Proof of Concept Award for this novel project. The team also recived a Barts Innovations in Healthcare Award for the initial development of a robotic surgical retracotor for colorectal surgery.

Based on his research in Renewable Energy, Dr Shaheed was invited by the Eni Scientific Secretariat to submit an application for the Eni Award, 2016, the most prestigious award in the field of Renewable Energy which is received by the world leading scientists.

Dr Shaheed supervised a research team to invent the the 'first Solar Helicopter (Solarcopter) in the world'. The helicopter can be operated with solar energy only without the help of any Battery. The news appeared in a number of National and International Media including the Daily Planet show of Discovery Channel, Gizmag, Fast Company and Designboom Magazines, the Daily Star and the Independent. The news was also broadcast by the Channel I and Channel S. The project received the National Physical Laboratory prize in the Industrial Liaison Forum (ILF).

Dr Shaheed received a Queen Mary Drapers' Teaching Fellowship for demonstrating a sustained commitment to the highest quality teaching and best teaching practices. Only 3 Fellowships are awarded across the University each year to encourage, recognise and reward excellence in teaching and exemplary student learning support.

Dr Shaheed has been awarded a National Teaching Fellowship (NTF) - the most prestigious UK award for excellence in Higher Education teaching and student learning support. Widely recognised in the UK and internationally, the award celebrates individuals who have made an exemplary impact on student learning and promoted excellence in teaching. Detailed news is available here: