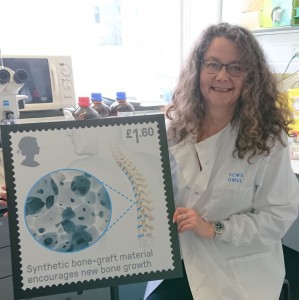 Karin Hing is a Reader in Biomedical Materials within the School of Engineering and Materials at Queen Mary University of London, prior to this she was an EPSRC Advanced Research Fellow within the IRC in Biomedical Materials. She was awarded the Fellowship in 1999, having worked as a post doc after completing her PhD studying the biological response to Bovine derived bone graft substitutes in 1996. As a Post-doc she invented a novel processing route for the manufacture of porous ceramics with a hierarchical porous structure (reflecting the structure of natural trabecular bone). She used this technology, in collaboration with colleagues, to achieve the objective of her advanced research fellowship, which was to develop a fully synthetic ceramic (apatite based) bone graft substitute material with a pore structure and chemistry optimised to facilitate good quality, rapid bone repair in applications such as spinal fusion, total hip revision and skeletal reconstruction following trauma or disease.

Her research formed part of the underpinning science behind ApaTech Ltd. a QMUL spin-out company that was founded in 2001 to translate pioneering research into clinical practice through the launch of Apapore and Actifuse synthetic bone graft substitutes. In 2010 Apatech was acquired by Baxter for $330m in recognition of its position as a global leader in the provision of their bone graft substitute technologies.

These investigations have led to the development of 3D mechanosensitive In vitro models for investigation of the phenomena behind structural enhancement of the rate and volume of bone tissue regeneration in the body. While on-going collaboration with Baxter, has led to the launch of Inductigraft (2013) and AltaPore (2017), synthetic bone graft substitutes with enhanced osteoproductivity and, in clinical trials, similar efficacy to autograft. To date it is estimated that ApaTech/Baxter bone graft substitute materials have treated over 400,000 patients world wide.

Karin is also actively involved in public engagement having appeared in a feature on her research in an episode of the BBC's prime time science programme, 'Bang Goes the Theory' (March 2013). She was awarded the Royal Academy of Engineering's Silver Medal in 2011 and has since been awarded the Kroll Medal by the Institute of Materials, Minerals and Mining, and the Biocompatibles Prize by the UK Society for Biomaterials, both in 2013. In 2019 the outstanding engineering achievements that underpinned the founding of ApaTech and development of Actifuse and Inductigraft were celebrated as one of the six Royal Mail stamps issued commemorating British Engineering.