There are promising electronic materials for the creation of better solar cells. They can in principle boost  photovoltaic, display, lighting and sensing technologies. However, they contain lead, which can leak out under the influence of moisture from rain and even the effects of sunlight and oxygen. This, naturally, is not good for living organisms such as humans. And lead must not be allowed to accumulate in the habitable environment. Our research has the goal of making these devices safe from the leakage of lead, but engineering their architecture, encapsulation and incorporating absorbers. The work also examines the recycling of devices that have reached the end of their service lives. 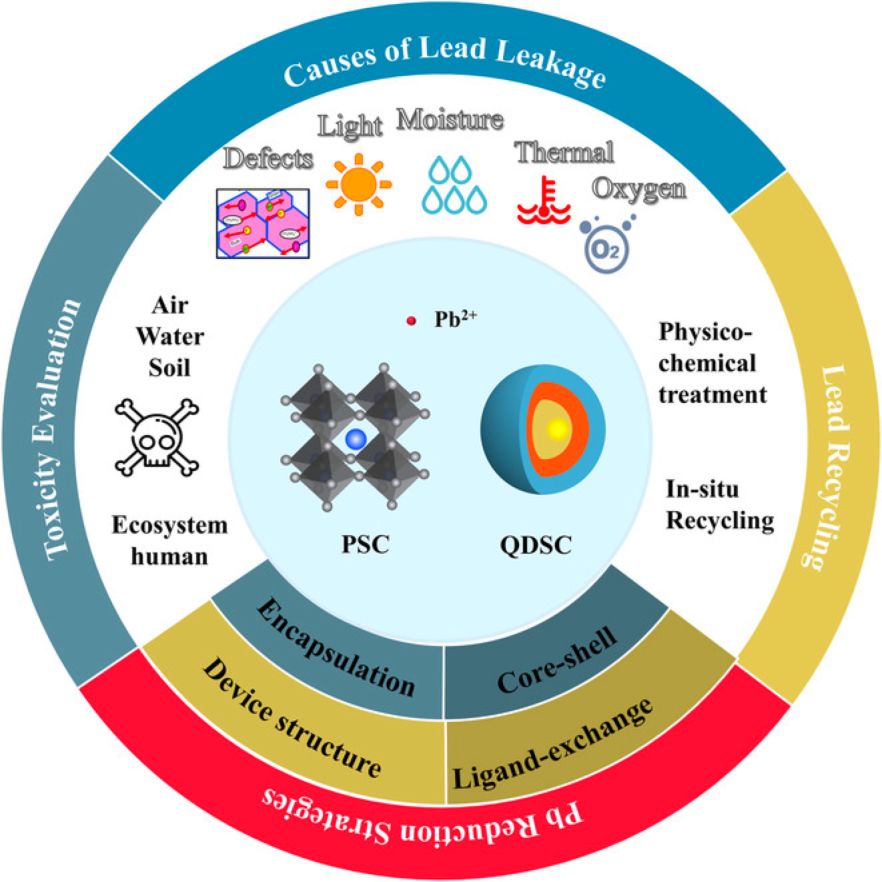 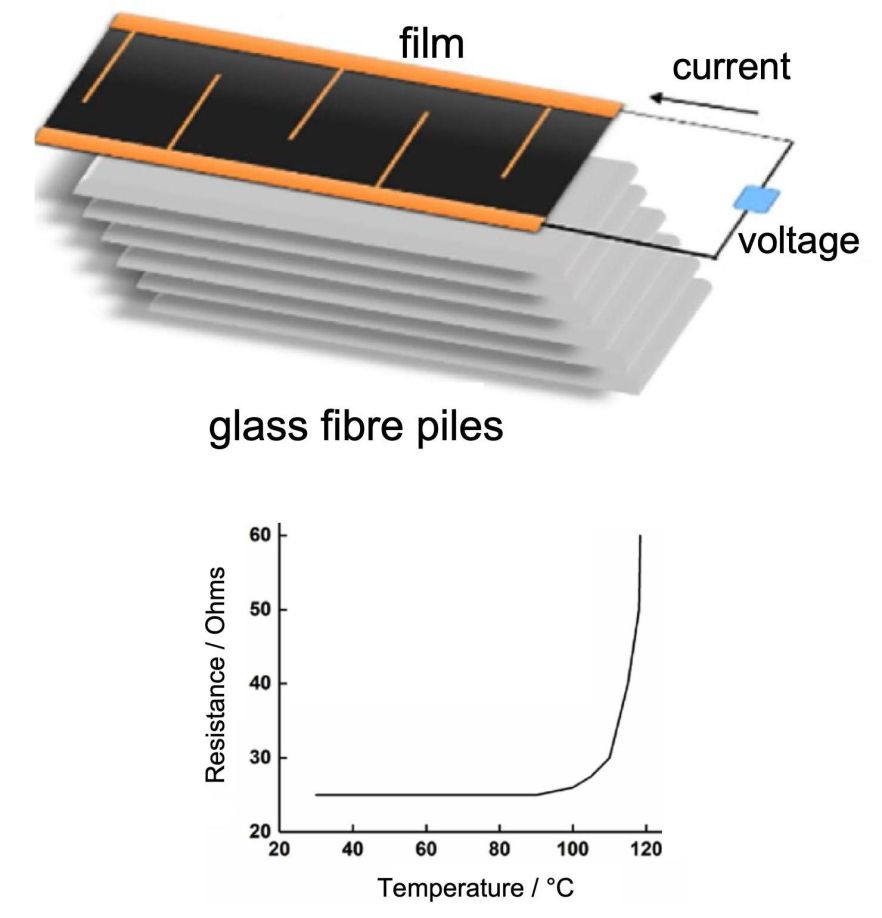 Imagine you could produce a fibre-reinforced polymer composite using just 1% of the energy currently required. Well, we have done that.  When making such a composite, the polymer must be cured at a high temperature to allow the molecular chains to link. This is normally done using an oven. We have introduced a thin surface-film containing minute carbon platelets that can be electrically stimulated to heat the composite to the required temperature. But more than that, the heating layer is such that its electrical resistance shoots up automatically  at about  120°C, so that the composite cannot be overheated or burn. This remarkable invention does not require an oven so the composite can be made outside. The invention therefore enables easier processing and a massive reduction in energy use when making composites. Such composites are used in many applications, including aircraft and terrestrial vessels of all kinds.

Ways of transporting hydrogen are important in a future economy where the key fuel may be the lightest element in the universe. 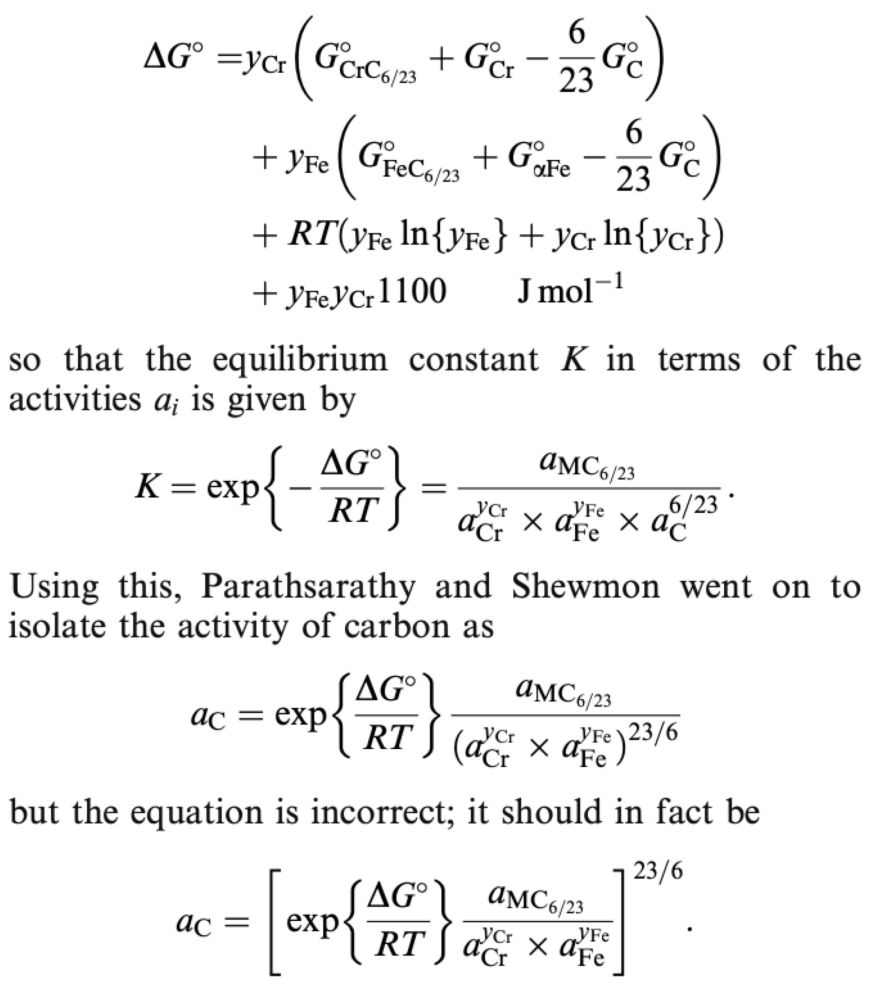 Surfaces that violently repel water can eliminate the need for de-icing, cleaning, and in principle can be useful in medicine. However, there are problems, connected with robustness and durability.

We are developing the science of superhydrophobic surfaces with the goal of real-life applications. The subject covers the microscopic topology of the surface in contact with liquid, multiple Gibbs free-energy mimima that create contact-angle hysteresis, etc. We might achieve dramatic reductions in, for example, the use of chemicals to de-ice surfaces. 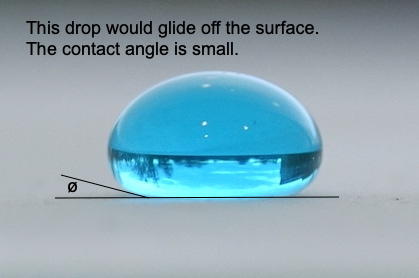 A ferroelectric material contains electrical dipoles that are aligned in regions known as domains. Each of these regions has the dipoles aligned in different directions, so there are boundaries (domain walls) in-between. The ease with which such walls move determines the material's response to an external electrical field, the response characterised by a quantity known as the dielectric permitivity. Such materials are useful in electronic components. 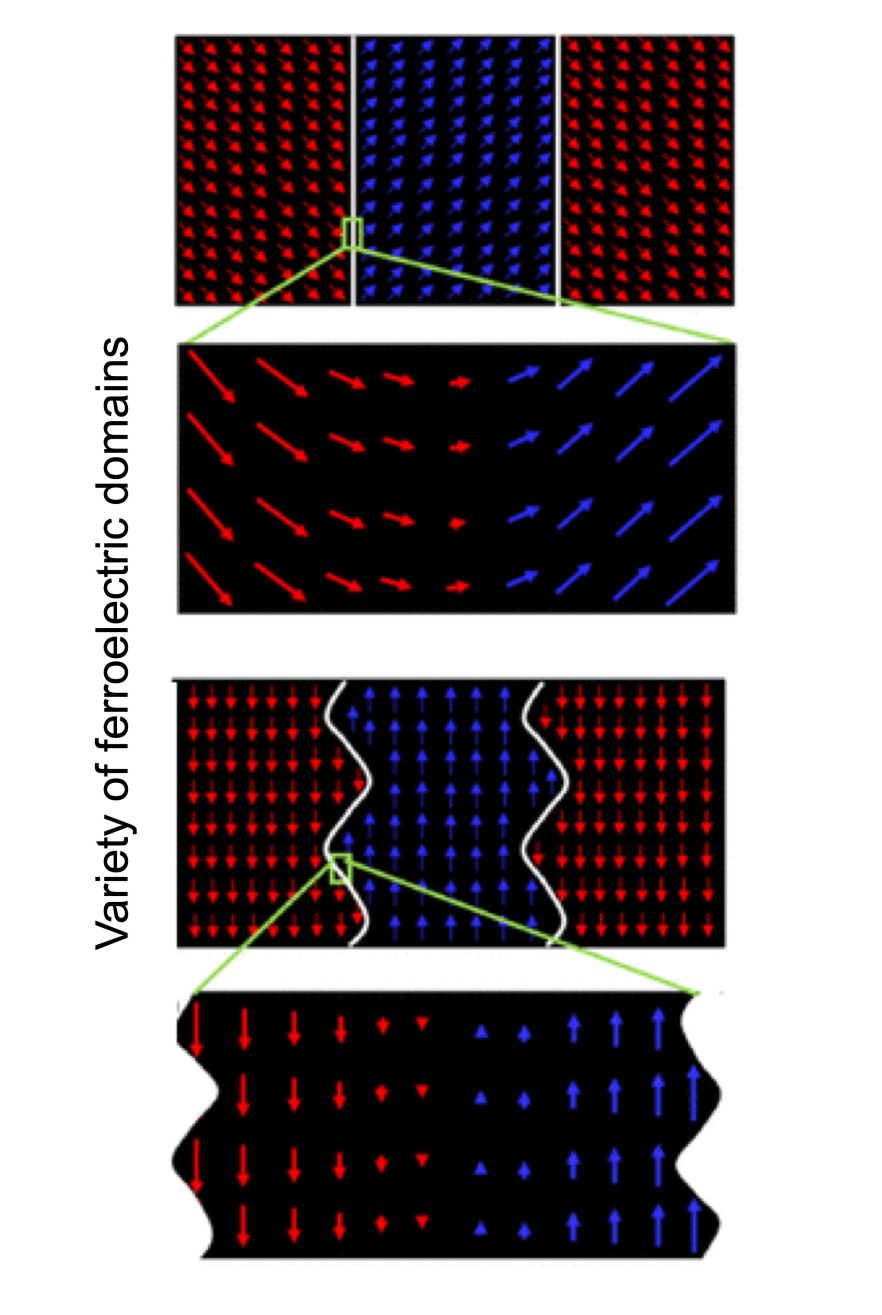 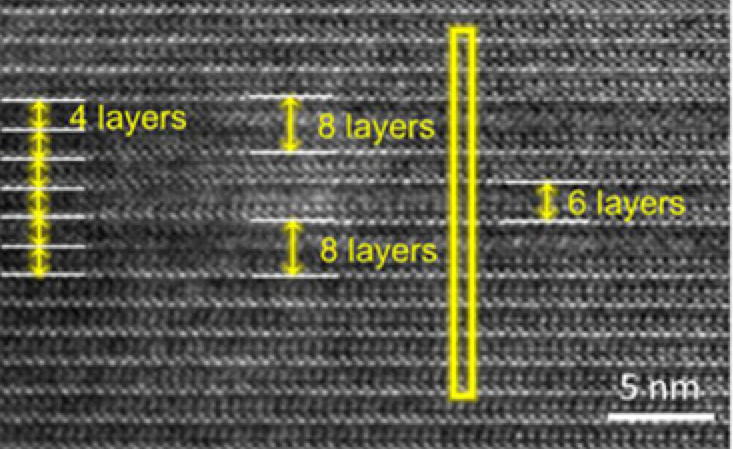 A dielectric material is an electrical insulator, but can be polarised by the application of an external electrical field. The permitivity of such a material is its ability to store electrical energy in the presence of the electrical field. An alternating field can cause changes in polarisation that in turn cause heating and therefore a loss of energy. The rapidity with which the material responds to the applied electrical field determines it tunability. We have developed a new material with a layered perovskite structure containing strontium, tantalum, niobium and oxygen, that has an optimal combination of all of the properties described above. In part, this is a consequence of our control of the oxygen atoms, of faults in the crystal structure, verified by direct observations using high-resolution electron microscopy. The fault illustrated on the left, shows the disruption of the perfect crystal structure on an atomic scale. Materials like these can greatly assist in the development of communication devices and associated electronics.

The magnetic field strength at the Earth's equator is 0.00003 Tesla, whereas at Queen Mary University of London we can do experiments where more than 3 Tesla of field can be applied. Many materials react to such fields when undergoing processing such as heat treatment, solidification and a myriad of other phenomena. Magnetism can have huge effects on sintering, where mechanically compacted powders are heated under pressure so that atoms move in a way that binds these powders together. Magnetic fields in these circumstances can alter the contact between particles, and therefore change the rates of sintering, which is an expensive process that is energy intensive. The image on the right shows how the nickel particle would be attracted by the magnet and then force the silver particles into intimate contact. Of course, there many other ways to exploit strong magnetic field to change materials. 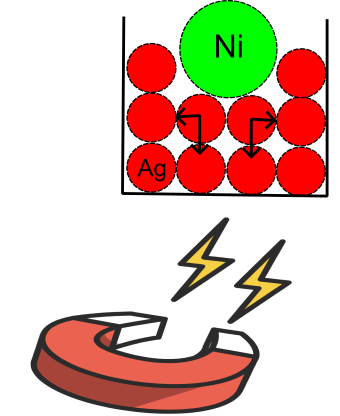 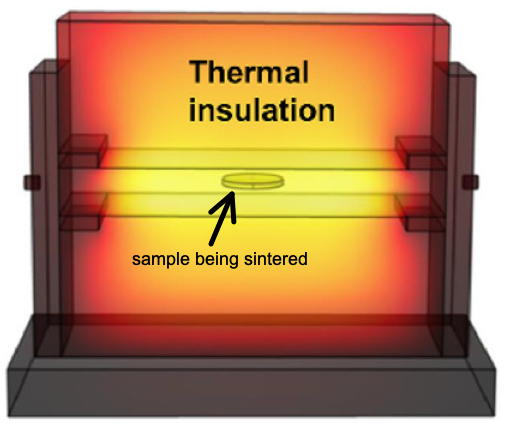 Thermally-insulated rapid high-temperature sintering  has been developed to maximize the densification of yttria-containing zirconia in order to improve the energy efficiency of the process. By combining finite element simulations with  sintering theory, it has been possible to quantitatively estimate the density of the sintered product.

Cold sintering, i.e., compaction of powders without the use of heat, can dramatically reduce the energy required to consolidate powders that normally have to be heated to some 2000°C. This technique may be particularly relevant for weakly bonded, layered materials such as graphite, boron nitride, bismuth teluride etc. We have demonstrated for the first time, that layered materials, because of the ease with which these layers can slip past each other, can be consolidate to nearly 8% of their theoretical density without the application of heat. In spite of the simple elegance of this method of pressing the layered structures together, the consolidation works and we have high hopes for this sustainable technology in the context of these so-called wonder materials. 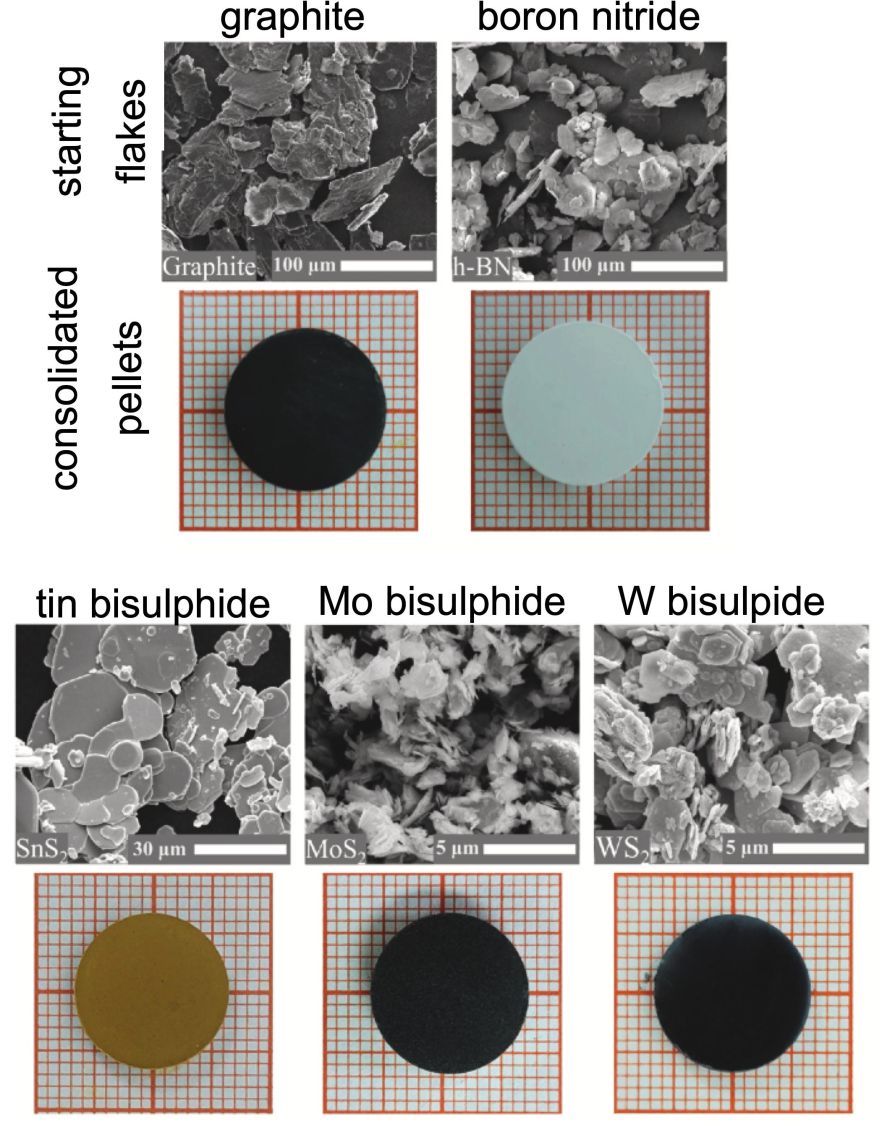 Carbon-fibre composites can be much more useful if the strength of their interface with the polymer matrix can be better engineered.   MXenes are a class of two-dimensional inorganic compounds just a few atom layers in thickness. By taking advantage of the fact that carbon fibres are electrically conducting, it is possible to coat then with MXene, thus improving their connection with the polymer matrix. We have discovered that this enhances the flexural properties of the composite and as a bonus, provides a material that can be used for  electromagnetic interference shielding, by a mechanism that involves polarisation and conductive losses. 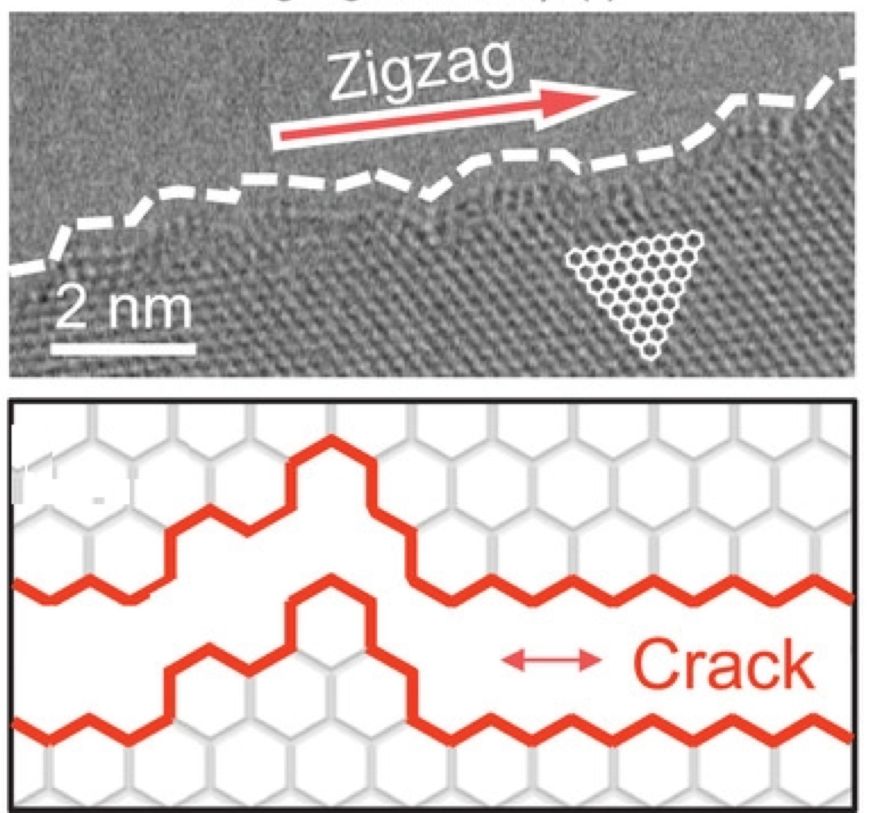 Composites containing extremely small particles have potential applications in  energy storage and flexible electronics. One such nanocomposite can be made using graphene so it is important to know how it fractures. We have used  Raman spectroscopy can be utilised to reveal the evolution and propagation of natural cracks while visualising the development of their associated strain fields. Based on this, we have proposed a method to control the formation of  cracks in graphene.

Noise pollution affects millions of people on a daily basis. We have been developing efficient, cost-effective methods that at the same time use materials normally thrown away without a second thought. Rice straw and coffee husk are generally considered waste materials, however we have developed acoustic panels with excellent sound absorbing absorbing properties thus reducing echo and reverberation at mid-low to mid-high frequencies. They are up to 15 mm thick and have low density. 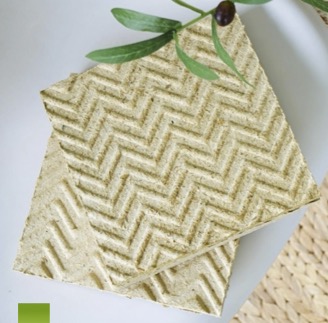 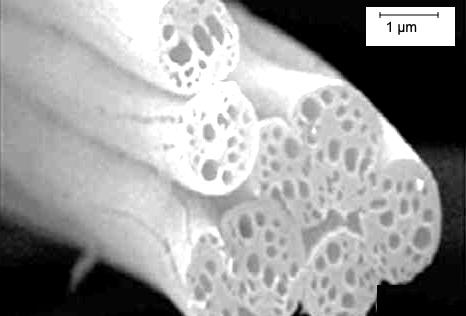 Electrospinning is a method of making fine fibres by charging and ejecting a polymer solution through a fine nozzle under the influence of an electrical field so that it deposits on to a fibre. We have explored different ways of making electrospun carbon to replace commercial carbon that is used as electrodes in  redox flow batteries with the aim of reducing biological waste.