The rate of adsorption on fluid surfaces controls the time dependence of the surface tension, and consequently, affects numerous important processes, from inkjet printing to coating, wetting and coalescence. This mechanism is often assumed to be diffusion-controlled, but we show that surfactants with tail as short as 10 carbon atoms already have a significant barrier for adsorption-desorption on water|air. This is especially important under the industrially relevant high-convection regime of transport, where the barrier dominates the surface kinetics. We also measure directly the dependence of this rate on the surfactant coverage. 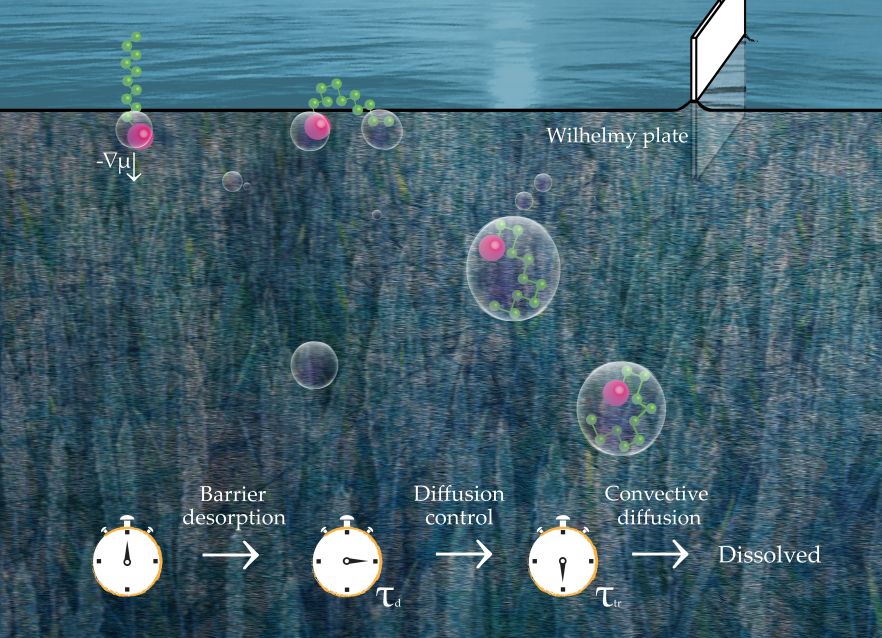 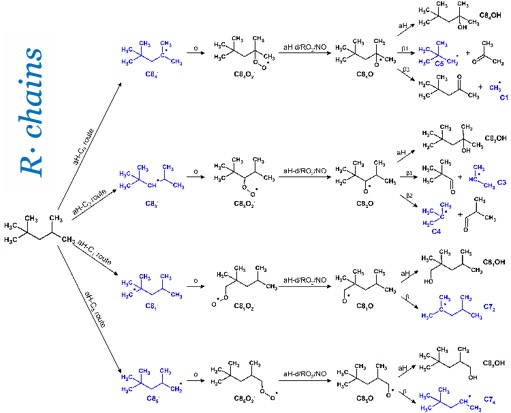 Surface deposits in engines deteriorate their performance and lead to dramatic increase in emissions, especially with biofuels. In the initial stages, a liquid fuel film sticking to the surface is subjected to nitrogen oxides produced by the combustion, which initiate a radical chain that produces adsorbing and polymerizing species. We study the detailed mechanism theoretically and with GC-MS, and develop methods for mitigation.

Through operando Synchrotron-based X-Ray micro computed tomography we unveil information on the evolution of pores and morphology of ligno-cellulosic biomass during the pyrolysis of solid biofuels. These observations shed new light on the numerous modelling attempts at resolving the kinetics of thermochemical decomposition of biomass and open the way to a new series of ‘tuned’ sustainable porous carbons for environmental applications such as water remediation. 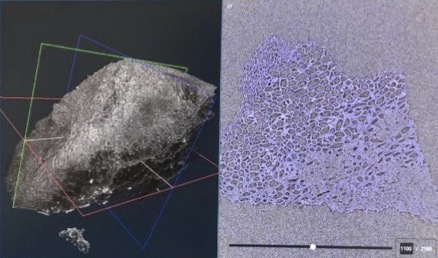 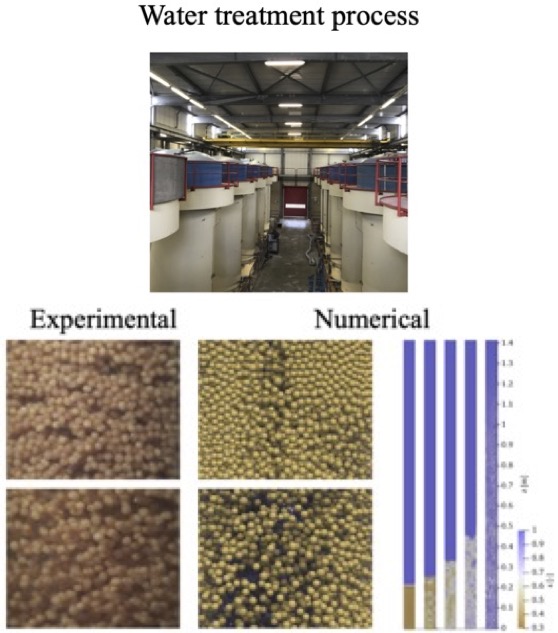 In drinking water treatment operations, liquid-solid fluidisation is frequently used, for example in seeded calcite crystallisation water softening processes and backwashing operations to clean Granular Activated Carbon and rapid sand filtration beds. For modest superficial fluid velocities, liquid–solid fluidisation systems are generally considered to be homogeneous, as reported in the literature. In collaboration with an industrial partner Waternet (Amsterdam, NL) we found that during fluidisation experiments with calcite grains, open spaces of water (voids) are observed between the fluidised particles, even at relatively low fluid velocities, while more significant heterogeneous particle–fluid patterns are detected at higher fluid velocities. Such heterogeneous behaviour can affect the chemical crystallisation efficiency significantly. To obtain detailed information about voids in bulk regions, complementary Computational Fluid Dynamics - Discrete Element Method (CFD-DEM) simulations were performed, in collaboration with colleagues at Universities of Delft and Eindhoven (NL), and results were found to be in agreement with our experiments

We have combined models for radiation transport and computational fluid dynamics to form a unique simulation tool for predicting a wide range of industrial applications, ranging from nuclear reactor analysis and environmental modelling, to disinfection methods of water and air using ultra-violet-C (UVC) light. The WYVERN model is a highly parallelised code capable of running on the UK's largest high performance computing facilities providing high resolution solutions to complex multi-physics problems. In this simulation we are showing the fluid flows and the radiation intensity of a UVC water disinfection reactor system. Ultra-violet lights within the reactor remove pathogens from the water as it is pumped through the reactor vessel. With our collaborators at Cranfield University the model is able to predict disinfection rates, thus ensuring safe level of disinfection, but importantly it can optimise designs that reduce energy usage of these large-scale purification facilities. 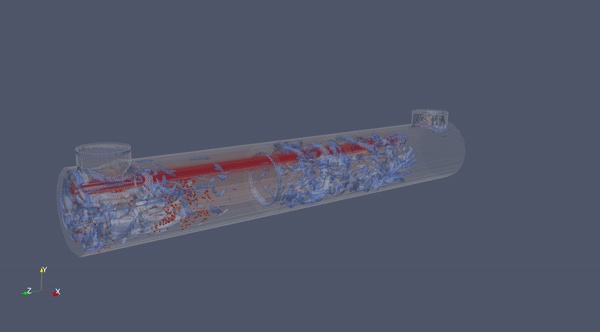 Most molecules simply freeze – from liquid to solid. But many exhibit several intermediate states – and for long molecules there exist several so-called “rotator” phases. Such phases exist in the biological membranes (made of phospholipids) and are important for cellular responses and transport in and out of our cells. We have pioneered the methodologies to simulate liquid-rotator and solid-solid (rotator-crystal) phase transitions with optimized molecular dynamic force-fields. We have achieved predictions of melting points with accuracy of 2°C from the experimentally determined ones. Solid-solid transitions also within 5-10 °C from experimental. Here we show the simulation of an order-disorder transition of an environmental pollutant – a fluorinated surfactant – at an interface that may be useful for remediation.

We are taking inspirations from where just as intricate micro- and nanostructures could be grown bottom up additively from single molecules, near ambient temperatures, without the need for expensive materials and infrastructure. We make use of our recent discovery of artificial morphogenesis to grow a variety of regular geometric shapes and of different sizes (from 50 nm to over 1 mm). By contrast, micro- and nano-manufacturing is a high value-added industry (with most of the microelectronics and solar cells included in it), but it is also a very unsustainable industry. Technologies such as lithography generate a lot of waste, due to their subtractive nature. In some cases the final product is only 2% of the material inputs! So, by taking the nature-inspired approach we aim to improve not only the manufacturing of static micro- and nanoparticles, but to be able to grow invisible robots bottom-up too. These microswimmers, featured on the cover of Nature Physics, are ones we can grow sustainably, and though made of only two chemicals, they can harness fluctuations in temperature to recharge themselves and keep swimming. 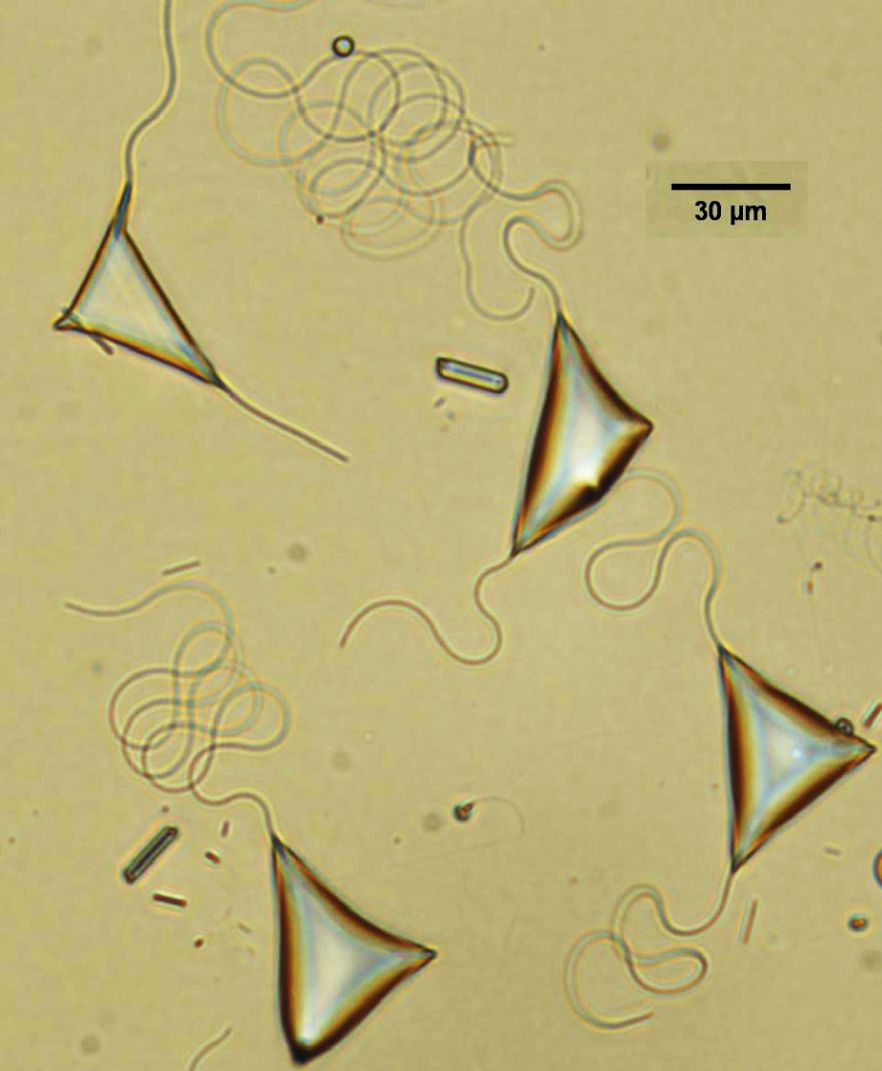