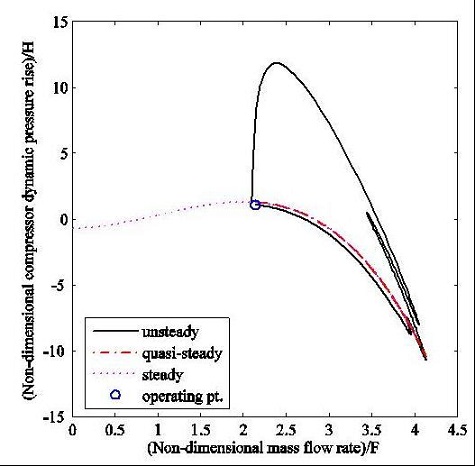 In this research, an unsteady non-linear and extended version of the Moore-Greitzer model is developed to facilitate the synthesis of a quasilinear stall vibration controller. The controller is synthesised in two steps. The first step defines the equilibrium point and ensures that the desired equilibrium point is stable. In the second step the margin of stability at the equilibrium point is tuned or increased by an appropriate feedback of change in the mass flow rate about the steady mass flow rate at the compressor exit. The relatively simple and systematic non-linear modelling and linear controller synthesis approach adopted in this paper clearly highlights the main features on the controller that is capable of inhibiting compressor surge and rotating stall vibrations. Moreover the method can be adopted for any axial compressor provided its steady state compressor and throttle maps are known.
Related Publication: “Modelling and Quasi-Linear Control of Compressor Surge and Rotating Stall Vibrations,” Accepted for publication in the Special Issue on "Nonlinear Vibrations, Stability Analysis and Control," of the journal "Mathematical Problems in Engineering" July 2010.