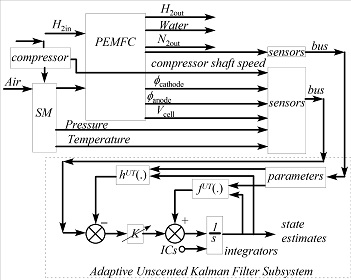 In this work a new nonlinear H∞ estimation algorithm is applied to Proton Exchange Membrane Fuel Cell (PEMFC). It is well known that the traditional H∞ estimator for a linear system consists of an optimal full state estimate estimator. In this work, the adaptive method is coupled with the unscented Kalman filter (UKF) and is used to estimate the states of polymer electrolyte membrane fuel cell. Our aim is to establish the superiority of the adaptive UKF over the standard UKF with no adaptation of the process noise covariance matrix. For purposes of estimation certain internal states such as the liquid water mass in the anode and cathode channel, liquid water volumes and pressures in the gas diffusion layers, and the stack temperature are assumed to have reached steady state. When this is done and fuel-cell measurements are made of the stack voltage, the relative humidity in the anode and cathode channels, the stack temperature, and the stack current, one can set up a nonlinear observer model. The model facilitates the estimation of the states and key parameters of fuel-cell stack in real time. The estimated states converge and subsequent simulations with these states incorporated into the model demonstrate good performance characteristics, such as the stack voltage and output power. By comparing the estimated stack voltage with and without adaptation it is shown that the adaptive state estimation method is superior to the case without adaptation.
The work is being used in the development of hybrid power trains for automotive applications and for the health monitoring of fuel cells.
Related Publication: i) “Adaptive State Estimation of a PEM Fuel Cell,” IEEE Trans. on Energy Conversion, Vol. 27, No. 2, June 2012, pp. 457-466 (Impact factor 2.26)
ii) Vepa. R. “Dynamic Modelling, Simulation and Control of Energy Generation”, Lecture Notes on Energy series, Vol. 20, Springer ISBN 978-1-4471-5399-3, 2013.