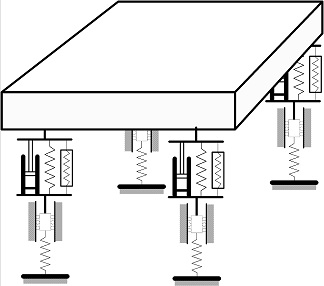 In this work, a new nonlinear H∞ controller synthesis algorithm is applied to suspension and tracking control of a mobile vehicle. It is well known that the traditional H∞ controller for a linear system consists of a full-state estimate-based linear feedback control law and an H∞ state estimator. The feedback control law is synthesized by solving an algebraic Riccati equation, whereas the estimator is similar in form to a Kalman filter (KF). The nonlinear controller is obtained by synthesizing a “frozen” or “semifrozen” estimated state optimal control law, replacing the estimator by a nonlinear filter, and obtaining the estimates by applying the unscented transformation. The resulting controller is a nonlinear controller. The results indicate that, in the case of the closed-loop nonlinear H∞ controller, the estimator tracks the platform position to within 2% of the setpoint. When the H∞ estimator is combined with methods involving the control law synthesis based on replacing the nonlinear optimal control problem by a sequence of linear optimal control problems, a powerful computational tool may be established for synthesizing control laws for a variety of nonlinear controller synthesis applications.
Related Publication: Vepa R. “Unscented H∞ Estimator based Nonlinear Suspension and Tracking of Mobile Vehicles,” IEEE Trans. on Vehicular. Tech., Vol. 61, No. 4, May 2012, pp. 1543-1552 (Impact factor 1.485).