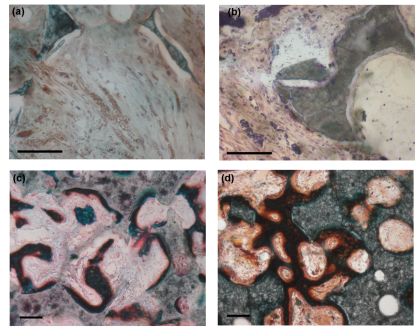 Bone mineral has a similar crystallographic structure to hydroxyapatite (HA), a hydrated calcium phosphate with a chemical formula of Ca10(PO4)6(OH)2 and a Ca:P ratio of 5:3 (1.67). However bone mineral differs from HA in that it is characterised by calcium, phosphate and hydroxyl deficiency (reported Ca:P ratios of 1.37-1.87, internal crystal disorder and is heavily substituted with a number of cations and anions, the principal one being carbonate (up to 8wt%), making bone mineral more closely related to an A-B type carbonate substituted apatite. Other ions which readily substitute into the apatitic lattice of bone mineral include sodium (up to 0.8 wt%) and magnesium (up to 0.5 wt%) at the trace level, with elements such as potassium, strontium, zinc, fluorine, chlorine and silicon found at ultra-trace level. All these factors all contribute to an apatite that is insoluble enough for stability, yet sufficiently reactive to allow the in vivo sub-microscopic (5-100nm) crystallites to be constantly resorbed and reformed as required by the body, enabling bone to act as a mineral reservoir and thus a ready source of inorganic nutrients, the metabolic significance of which is becoming increasingly apparent especially given the temporal variation in ultra-trace level elements such as silicon with age and sex and its potential relationship with bone health. The bone healing response to silicon level (0, 0.2, 0.4, 0.8 and 1.5wt% Si) within 5 batches of matched porosity silicate substituted hydroxyapatite (Si-HA) scaffold was assessed by implantation of 4.6 mm diameter cylinders in the femoral intercondylar notch of New Zealand White rabbits for periods of 1, 3, 6 and 12 weeks. Histological evaluation and histomorphometric quantification of bone ingrowth and mineral apposition rate (MAR) demonstrated the benefits to early (<1 week) bone ingrowth and repair through incorporation of silicon, at all levels, in porous hydroxyapatite lattices as compared to stoichiometric (0 wt% Si) hydroxyapatite (HA). The group containing 0.8 wt% Si supported significantly more bone ingrowth than all other groups at 3 and 6 weeks (P<0.05), initially through its elevated MAR between weeks 1-2, which was significantly higher than that of all silicon-containing groups (P<0.05). The level of silicate substitution also influenced the morphology and stability of the repair, with elevated levels of bone resorption and apposition apparent within other silicon-containing groups at timepoints >3 weeks as compared to the 0 and 0.8 wt% Si groups. At 12 weeks the net amount of bone ingrowth continued to rise in the 0, 0.8 and 1.5wt% groups, apparently as a result of adaptive remodelling throughout the scaffold. Ingrowth levels remained highest in the 0.8wt% Si group which was characterised by a dense trabecular morphology in the superficial region graduating to a more open network in the deep zone. These results highlight the sensitivity of healing response to Si level and suggest that an optimal response is obtained when Si-HA is substituted with 0.8wt% Si through its effect on the activity of bone forming and bone resorbing cells.