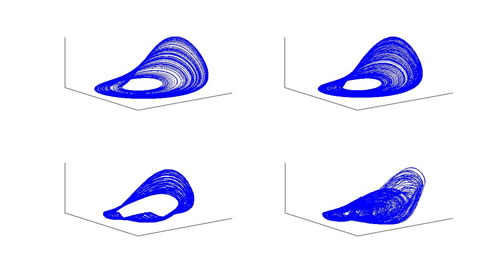 In their ground breaking 1990 paper, Pecora and Carroll showed that, in spite of sensitive dependence on initial conditions, coupled chaotic systems can synchronize. Following this work, in the last decades considerable interest in the notion of synchronization of complex or chaotic systems has arisen. Among others, perhaps the main motivation so far seems to lie in potential applications regarding secure or private communications, though the number of reported applications is still limited to date.

On the other hand synchronization appears in numerous different ways, most notably in biological applications (heart beat, brain activity, neural activity, walking, etc.), nature (planetary motion), physics (organ pipes, etc.) and engineering (coordinated robot motion, etc.). More recently, it was observed that coupled chaotic Ikeda time-delay systems can exhibit what is called anticipating synchronization in that the state of one of the systems synchronizes with the future state of the other system, which allows one to predict the state of the latter system in spite of the inherent unpredictability of chaotic systems. In many applications where synchronization seems to be essential, the coupling between systems naturally contains a small amount of delay that nevertheless does not prevent synchronization from occurring. In this regard one may think about transport delay (e.g., chemical transport between cells in a living organism) or other forms of delay like optical delay in the synchronized movement of swarms of birds. Another example occurs when multiple agents, like, e.g., robots, share a communication network, which in principle will lead to a natural delay in the execution of (shared) tasks. It is therefore of interest to investigate how anticipating synchronization can be achieved for general classes of complex or chaotic systems. In this work we considered a wide class of chaotic time-delay systems, so-called Lur’e systems, and discussed when and how one can design anticipating synchronization schemes for these systems.