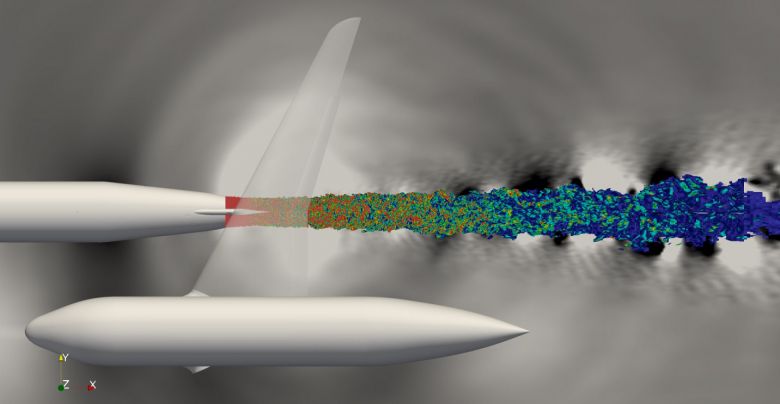 Aircraft noise is known to be responsible for many physiological and psychological effects. According to the recent studies, aircraft noise not only creates a nuisance by affecting amenity, quality of life, productivity, and learning, but it also increases the risk of hospital admissions and mortality due to strokes, coronary heart disease, and cardiovascular disease. It is, therefore, of great importance for major aviation industries, such as Airbus and Embraer, to better understand the aerodynamic noise generation mechanisms and develop more robust and effective methods to reduce the noise at source.

While the introduction of high bypass ratio turbofans led to significant improvement of the aerodynamic performance of jet engines, it also brought about an aeroacoustical challenge, known as the "jet installation effect", due to the interaction of the jet hydrodynamic field with the high lift device components. The interaction of the jet linear or non-linear hydrodynamic field with the high-lift device components results in a significant increase of noise at low frequencies and also the potential emergence of some aharmonic tones. While a number of very recent studies have provided some insights into the physics of the low-frequency noise amplification in the case of simple circular jets, our current understanding of the interplay between the jet hydrodynamic field, the flow instabilities and the trapped acoustic modes, particularly for non-conventional jets, which generates noise, remains very limited. Our approach in JINA is to reduce the low-frequency noise amplification by the manipulation of the jet hydrodynamic field via nozzle shape optimization. In the JINA campaign, the researchers of Queen Mary University of London and the University of Bristol bring together expertise in experimental and computational aeroacoustics and design optimisation, alongside a strong international advisory and industrial board, aiming at the development of fundamental understanding of jet installation noise, leading to design and manufacture of next-generation quiet jet engines.

The JINA team at SEMS works on the development of next-generation high-fidelity computational aeroacoustics methods tailored for Graphics Processing Unit (GPU) computations. Our recent studies demonstrated that advanced computer architectures (GPU) in combination with modern computer algorithms (high-resolution schemes, compact stencil, asynchronous time stepping, low memory footprint based on single precision arithmetic), which exploit existing open source grid generation and wall modelling libraries (OpenFOAM) in combination with the standard acoustic integral methods (FW-H) make first-principle methods such as Large Eddy Simulations (LES) feasible in ‘compute under the desk’ mode. In comparison with conventional LES implementations the current approach offers a reduction in time/cost more than 10 times. The significant acceleration of high-fidelity simulations achieved makes it feasible to use such tools inside a Multi-Disciplinary-Optimisation loop where one of the goals is noise reduction. The application of high-fidelity computational methods such as LES in the design optimisation process at low cost may revolutionise the design process of new aero engines where the aeroacoustic performance, which requires high-fidelity modelling, is increasingly important.