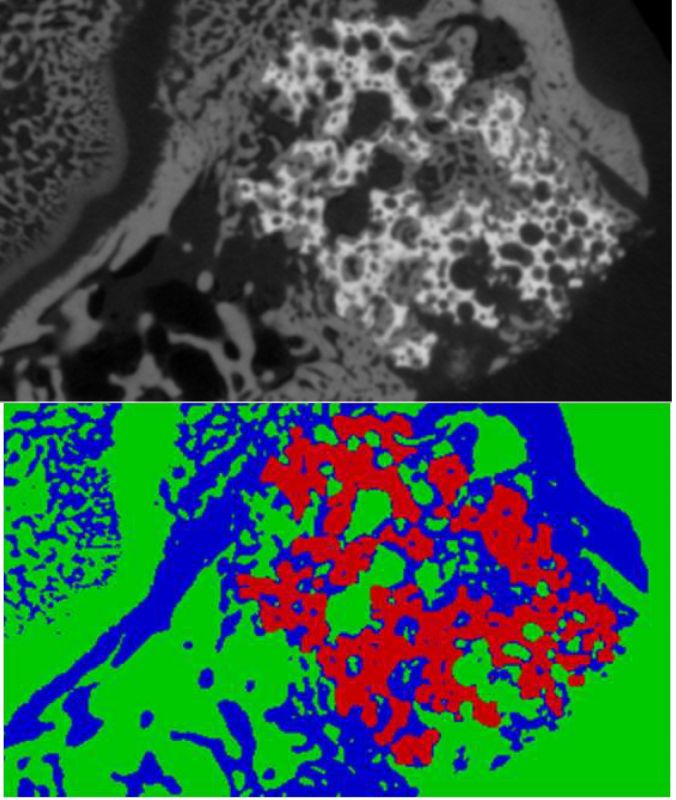 There has been much work into getting clear and precise images of bone growing within different osteoconductive and osteoinductive scaffolds for the aim of investigating and quantifying the effect the different grafts have on the bone that forms within the graft. Before the bone structure and volume can be quantified, the images produced need to segmented into their different regions. Using images produced from x-ray micro-computed tomography (XMT), the samples can be segmented based on their densities. As the voxels have distinct size, if just the density is used to segment out the regions, there will be some miss-identification at the edges of the regions. To overcome this problem of misidentification, automated segmentation methods were developed which take not only the intensity of the voxels in the images (which are related to the density) into account for the segmentation but also the local properties.With correct segmentation the volume and surface area are better represented and methods for structure measurement can and were developed. These methods allow for not only the structure of the bone and implants to be quantified, but for the change in structures between the different implants to be compared. This allows for the different structures caused by the different graft materials to be seen and compared. This comparison when used on its own or with other methods such as histology not only allows for the different structures to be identified but all the change in structures due to factors such as remodelling to be identified.