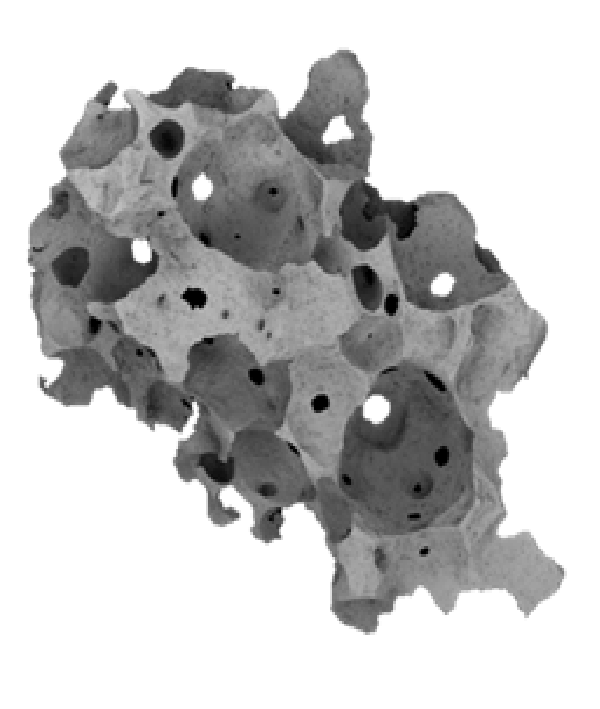 Silicate substituted apatite has been demonstrated to have an enhanced capacity to stimulate bone regeneration in vivo, as compared to phase pure stoichiometric HA.  Moreover, altering the level of strut porosity has the capacity to confer apparent osteoinductive behaviour to these graft materials.  However, despite numerous studies in vitro there is still no clear understanding of the mechanism(s) through which introduction of  trace levels of silicate ions into the structure of  the hydroxyapatite crystal lattice and manipulating the grafts strut porosity can have such a significant impact on the external biological response.  There have been a number of investigations into the sensitivity of cell metabolism to ions that may be released from a variety of Ca-P and bioglass based materials, and the nature of the adsorbed protein layer is known to be key to the direction of cell attachment and behaviour on all implanted synthetic surfaces.  Generally in comparisons of HA and SA chemistry, or  strut porosity variation in SA, 2D static cultures with MSCs or osteoblast like cells, when assaying typical markers of osteoblastic metabolism and differentiation, marginal differences are observed between the different materials that do not reflect the significant variations seen in vivo.  However, the influence that these phenomena may have on cell migration and recruitment has received little attention.  The aim of this project is to investigate whether the step change in biological response seen in vivo may be related to more efficient cell recruitment and tasking, through (i) optimal exchange of Ca/PO4/SiO4 in proximity to the graft material (ii) optimal sequestering and enrichment of native signalling molecules – where both these factors will be impacted by (a) altering of the graft bulk and surface-physiochemistry (introduction of silicate ions) and (b) altering of the graft surface morphology and surface area (increasing strut porosity).