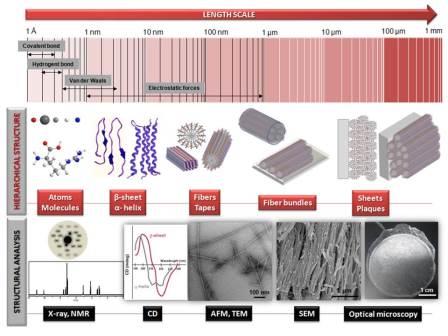 Directed self-assembly (DSA) is a strategy to control order in materials across scales by tuning the directionally of self-assembly interactions at the nanoscale. In DSA the positions of self-assembling building blocks are guided by an external input to lead to specific orientation or alignment, introducing hierarchical organization. Examples of external inputs include mechanical forces, such as shear effects, magnetic and electric fields, thermal gradients and chemically or topographically patterned substrates. In templated self-assembly (TSA), a prefabricated template (2D substrate, chemically or mechanically patterned) orients and directs the assembling components to create structures with better long-range order than their non-templated counterparts; to control the morphology of the resulting assemblies; and/or form novel structures/phases that would not be favorable in the absence of the template. 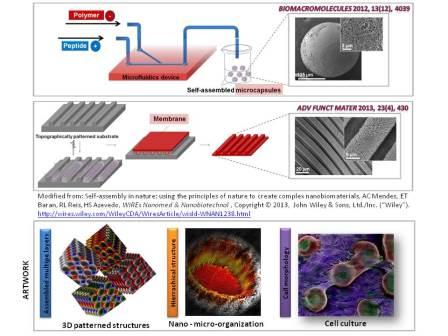 Our group has been tuning the interactions during the self-assembly of peptides with macromolecules (polysaccharides and proteins), through building block selection and manipulation of the assembly conditions. Self-assembling structures with unprecedented properties have been developed capturing the advantages of both peptide and polymer systems. In addition, by integrating bottom-up (self-assembly) into existing top-down (microtechnologies) fabrication processes we were able to fabricate hierarchical materials with high levels of precision and reproducibility. For example, we have successfully used conventional lithography techniques to guide the self-assembly of a positively charged multi-domain peptide with the anionic biopolymer hyaluronan, to generate different regular patterns with micro-sized dimensions on membranes. Another approach towards TSA is the use of geometric confinement to orient bulk structures or to induce the formation of novel morphologies not found in bulk systems. Our group has used microfluidics to generate polymer microdoplets to serve as templates for the formation of polymer-peptide microcapsules which are formed by self-assembly upon contact of the polymer droplets, containing the anionic polysaccharide xanthan, with positively charged a multi-domain peptide.