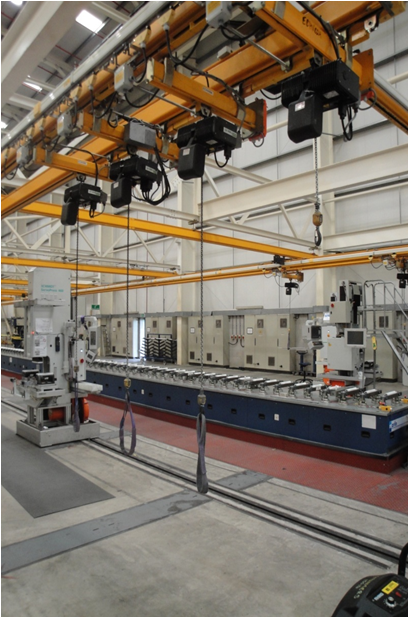 The stringers are designed to act as stiffeners to the wing skin panel to carry either tensile (bottom) or compressive (top) loads. In addition, stringers have certain profiles which fol-low the wing aerodynamic shape that contribute to flight and fuel efficiency. These profiles include a combination of bends and twists at different sections of the stringer. Typical pro-files include U curvature, ∩ curvature or combination of both U and ∩ curvatures.

Forming of stringer is a highly complex and labour intensive operation. As demand for air-craft increases, the deployment of resources in the forming process also increases. Therefore, there is a business need to introduce automation in this area in order to reduce recurring costs whilst meeting future production requirements. Currently, stringers are formed at the Stringer Manufacturing Centre (SMC) in Broughton using mechanical three-point bending. A hydraulic press form machine move along the stringers and bend the stringer at different sections.

The literature review highlighted two attempts to automate stringer forming process. The first work is dated back to 1988, when an automated stringer forming machine was devel-oped, tested and used in production environment at Chadderton. The second one was numerical and analytical modelling of stringer forming by Airbus in Filton back in 2004. The modelling is performed on a section of a stringer.