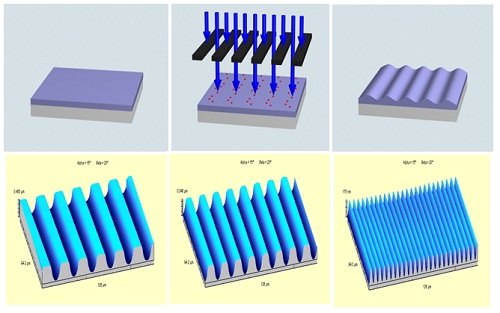 Nano- and micro-relief structures in polymer thin films are commonly used for a large variety of different applications such as micro-optical elements, micro-fluidics, anti-fouling coatings, and tissue engineering. Several techniques are known to create surface relief structures of which the most common are photolithography and mechanical embossing. These techniques; however, require expensive moulds or aggressive etching fluids. To reduce the cost and simplify the relief structuring procedure, new techniques based on photoembossing are being developed. 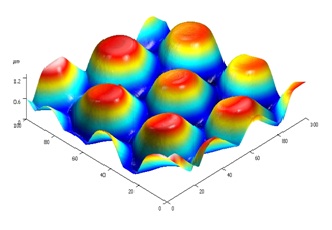 Photoembossing is based on a photopolymer that in its most simple form consists of a polymeric binder, a multifunctional monomer, and a photoinitiator. This mixture is processed from solution to form a solid thin film on a substrate. A relief structure is created into the photopolymer layer via a simple three-step procedure. First, a patterned ultraviolet (UV) exposure is applied to the photopolymer layer to locally activate the initiator. Although the initiator is activated, polymerization of monomer in the exposed areas is inhibited by the low diffusional mobility of the monomer(s) at room temperature with the photopolymer blend below or around its glass transition temperature. In a second step, the relief structure is formed by heating the sample above the glass transition temperature of the photopolymer. The increased mobility enhances the polymerization of monomer which causes a reaction driven diffusion of reactive species to the exposed areas. In a final processing step, the sample is fully polymerized by applying a flood exposure or a post-curing by heating. Unlike conventional patterning techniques, like hot embossing or photolithography, photoembossing does not require physical contact with the photopolymer thin film to develop the relief structures. It is especially this feature that has shown to be particularly useful for sealing micro-cavities and creating anti-reflection-coated micro-optical elements. Combined with the ease of processing, photoembossing is found to be a convenient and economical process to form complex surface relief structures in polymer thin films. We are currently developing new routes to create ultra-high aspect ratio structures for applications such as micro-lenses and tissue engineering.