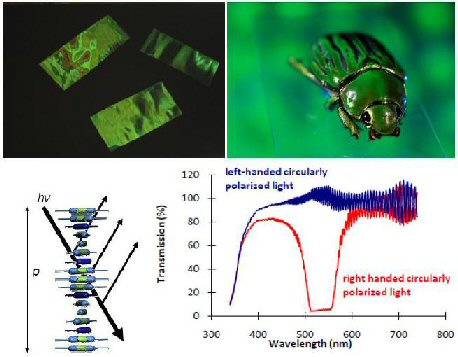 Colours can be classified into two types depending on the mechanism of production. The first one relies on the absorption of light, and the second on is due to the physical interaction of light with the materials’ structure, also called physical colour. Physical colour can be divided into three types: (1) colours due to interference of light; (2) colour due to diffraction of light; (3) colour due to scattering of light. Traditionally, man has generated colours using dyes and pigments that absorb part of the light spectrum. On the other hand Nature has used mainly physical colours. The blue wings of the Morpho butterfly, the round spots with violet to orange colours on the peacock's tail, and the iridescent colours on the jewel beetle are typical examples where the physical effects of materials on light play an important role.

Physical colour has advantages over the colour originating due to light absorption. First, it is more stable as the material used for colouring does not necessarily have to absorb light. Therefore there is less risk of discoloration induced by photolysis or photooxidation. Secondly, the physical colour is easily produced by controlling the structure of the material on a nanometer scale; different optical effects can be produced simply by modifying the alignment of a molecule or the periodicity of a structure.

A way to generate physical colour involves the application of self organizing materials such as cholesteric liquid crystals. Liquid crystalline materials allow a wide control of the structure on the nano- and micro-scale. The molecules in a cholesteric liquid crystal are organized in a helical ordered structure. The obtained helical ordering can be made to Bragg reflect a portion of the incident light, thus giving it a coloured appearance. The Bragg reflection is caused by the periodic modulation of the refractive index, as the molecular director is rotated through the thickness of the layer. The length over which the director rotates 360 degrees is defined as the cholesteric pitch. The helical pitch of the cholesteric molecules is dependent on temperature, the electric field, and the nature and concentration of impurities. Cholesteric liquid crystal materials can be further functionalized to act as sensors or actuators that respond by a colour change to stimulus such as temperature, humidity, UV-light, pH or organic solvent. We are currently investigating new routes to process these materials as functional coatings on polymer films or fibre.