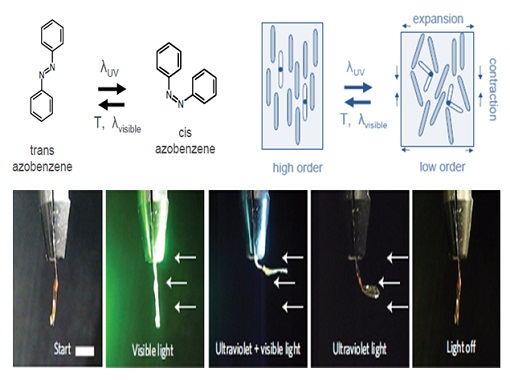 Polymeric microactuators are potentially useful in micromechanical systems (MEMS) and lab-on-a-chip systems because they allow for lightweight, flexible and disposable devices that are cheap and easy to process. Manufacturing of miniature polymeric actuators has been complicated owing to the necessity of including electrodes for actuation or using lithographic techniques for patterning. 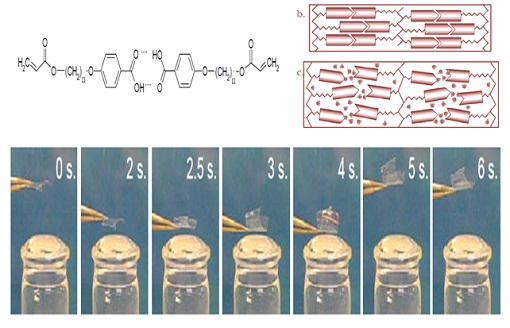 We have shown that liquid-crystal polymer actuators are able to show large and reversible shape deformations in response to a variety of applied stimuli such as heat, light and a change in chemical environment (e.g. humidity). These strain responses can be as large as 300% in one dimension and is controllable in magnitude with the input stimulus, without the need of a reset as, for example, in shape memory materials. The principle underlying liquid crystal network (LCN) deformations are conceptually simple: if there is no director reorientation and no generation of free volume, an aligned system must always contract along the director and expand perpendicular to it when brought into a state of lower order. A full nematic-to-isotropic transition reduces the order of an oriented liquid crystalline network to zero, and extremely large strains can be generated. In most existing cases, order variations have been temperature controlled, however light-sensitive azobenzene groups have also been incorporated into liquid crystal networks, bringing about the possibility of light-controlled actuation. To achieve complex motion beyond simple contraction and extension, we have used an ingenious alignment configuration: the direction of mesogen orientation changes smoothly and continuously from parallel to the surface on one face of the actuator element to perpendicular on the other. Photoexcitation causes contraction of the material on one surface and expansion on the other, as in a bimetallic strip.