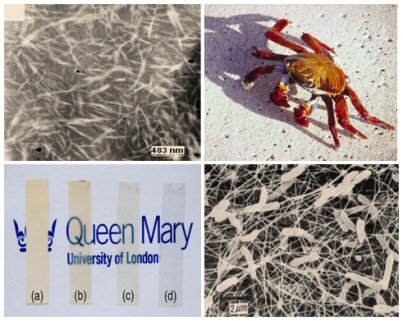 Traditional natural fibre composites suffer from limitations such as low strength, poor toughness, moisture sensitivity and discoloration and thermal degradation due to decomposition of hemicelluloses and lignin during composite processing. A promising way to address these shortcomings is through the use of cellulose nanofibres of high cellulose purity. Cellulose nanofibres or whiskers can be extracted from different organisms and made suitable for nanocomposites and are present in the form of native cellulose microfibrils in plant cell walls, including algae and tunicate sea animals. Nanocellulose fibres are also produced by bacteria (i.e., Acetobacter xylinus). These materials are highly interesting as reinforcements for polymers as cellulose molecules possess an extended chain conformation and form highly ordered fibrous crystallites with an estimated axial modulus of 130 GPa.

Chitin is another abundant natural polymer, second only to cellulose. The exoskeletons of crabs,
shrimps and krill, which are normally regarded as waste products, are the most important sources of chitin. Chitin whiskers have been extracted from crab shells through purification, bleaching, acid hydrolysis and homogenization processes. These chitin whiskers have been used as a reinforcing phase in polymeric matrices in order to improve their mechanical properties. For example, polycaprolactone (PCL) has been reinforced with chitin whiskers, leading to a fully biodegradable nanocomposite material. 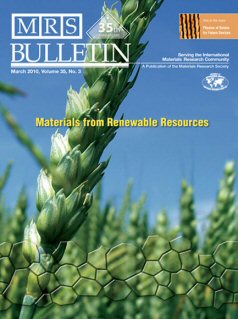 Bacterial cellulose nanofibres are also being used to reinforce biopolymers such as starch and PCL or are used directly to make high-strength nanopaper. Fully biodegradable in-situ grown bacterial cellulose/poly(vinyl alcohol (PVA) nanocomposite films have been produced of high strength and improved toughness due to nanofibre slippage together with optical transparency. For the future, microstructured cellulose bio-nanocomposite tapes and films are being developed based on biopolymers and cellulose nanofibres. This will lead to truly bioinspired materials as after drawing the cellulose nanofibres are aligned and these nanocomposite tapes can be used to build laminated structures similar to those found in plants or trees allowing these cellulose nanomaterials to be (re)assembled in a fashion similar to nature.