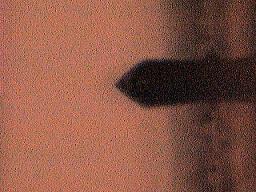 The colloid thruster uses electrospray atomization, whereby an electrolytic fluid (with conductivity ~1S/m) is injected, from an emitter, into an electric field (~1kV/mm) generated by an electrical potential difference between the emitter and an extraction grid. The fluid, under the influence of the electric field, forms a structure known as a Taylor cone. At the apex of this cone a jet is formed which subsequently breaks up to form a charged spray with species having a charge to mass ratio, q/m, typically 1-100kC/kg. This charged spray is then accelerated in a static electric field to produce a thrust. Figure 1 shows images of these cone-jet structures formed on micro-fabricated arrays .

A schematic of a typical configuration is given in Figure 2. 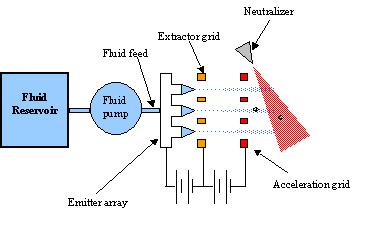