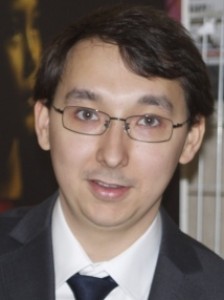 Dr Ildar Farkhatdinov is a Senior Lecturer in Robotics at QMUL since 11/2016. He is an internationally leading expert in assistive robotics and human-machine interaction. He is a principal investigator of several projects on wearable robotics, mobility assistance and haptic interfaces (budget £730k+). Several of his research works were recognised as the best paper or finalists for best paper awards at leading robotics conferences. Before joining QMUL, he was a postdoctoral research associate at the Human Robotics group of the Department of Bioengineering, Imperial College London (2013-16). He earned Ph.D. in Robotics in 2013 (Sorbonne University, UPMC, France), M.Sc. in Mechanical Engineering in 2008 (KoreaTech, South Korea) and B.Sc. in Automation and Control in 2006 (Moscow University, Russia). He has actively collaborated on a number of large-scale research projects: EPSRC NCNR to create novel robotic solutions for the nuclear industry; EU FP7 BALANCE to develop balance and robotic walking assistance for the elderly; EU FP7 SYMBITRON to develop exoskeleton control for people with spinal cord injury.