Fake a knee at the Science Museum 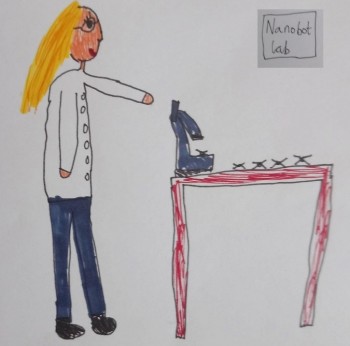 When we loose cartilage tissue in the knee joint and suffer from knee pain, the joint function is impaired and the patient may need a total knee replacement surgery. The procedure involves removal of the damaged and diseased joint and replacement with an artificial joint. Most patients who undergo knee replacements are age 50 to 80 years, but let’s say you are a 20 year old football player. You do not want a traditional knee replacement because you will never play football again.

Our research team is investigating ways in bioengineering to grow cartilage cells with biomaterials and nanotechnology, and use mechanical tools that mimic movement to help the cells grow and rebuild the tissue in the knee joint.

A pioneering scheme called The Bioengineering Experience, developed for children to be bioengineers for the day, teamed up with the QMUL scientists working in cutting-edge research and built a fake knee at the Science Museum. The scheme was part of the Women in Engineering Family Festival led by the Science Museum.

The activities included making ‘worms’ out of alginate, a non-toxic material derived from seaweed that easily changes shape from worms to beads, and ‘pink beans’ using agarose and small molecules to create 3D structures in nanoseconds. These biomaterials are used to grow tissues found in cartilage and are being used to repair diseases such as osteoarthritis.

When the children were asked to tell a story of what they learnt, one child said “I learnt that bioengineers work with all kinds of materials and liquids to help transplants for knees, hips and other body parts. I learnt that gels can be used to stop a knee cap and your shin bone from rubbing together.”

Another child drew a picture of a “Nanobot lab” and said “I learnt that you can grow cells in agarose jelly.  I also learnt that cartilage is 95% water and it acts like a sponge.”

“The bioengineering experience has made me think about what I want to be when I get older.”

“It was fun designing a knee implant.”

“I really enjoyed putting the beads into the calcium chloride and pulling on the cartilage, plus making my own inventions (which is one for the future).

When a parent was asked to draw a picture of a bioengineer, one dad drew a face with “a big smile because happy & interesting job” and a mum said “Amazing life changing stuff, making things to help people in the future".

The scientists from the Institute of Bioengineering, School of Engineering and Materials Science explained new ideas about how bioengineering could change the future in medical healthcare. The scientists explained why it is important to stretch cells in soft tissues such as tendon and cartilage. For example, stretching or exercise keeps the tissues in the knee joint strong.

When the children were asked to comment on what type of person could be a bioengineer, one child said: “You don’t have to come from a rich background to follow your dreams. A scientist can be anyone who is prepared to work hard and have fun.”

The Bioengineering Experience was awarded a Large Grant by the Centre for Public Engagement in 2014. Sign up to our newsletter to ber the first to know when the 2018 Large Grants opens.