Our research focuses on biosensing and electrochemical imaging.

Disposable biosensors for the detection of enzyme activities based on the enzymatic degradation of thin polymer films have been developed. Film degradation in the presence of an enzyme is monitored using impedance and Quartz Crystal Microbalance. Further information.

Light-Addressable Potentiometric Sensors (LAPS) and Scanning Photo-induced Impedance Microscopy (SPIM) are based on photocurrent measurements at electrolyte/insulator/silicon (EIS) field-effect structures. A focused light beam is scanned across the EIS structure exciting local photocurrents. Local changes in the surface potential are measured as a shift of the photocurrent-voltage curve along the voltage axis (LAPS) and can be used to image ion concentrations. By recording the maximum photocurrent in inversion, the local impedance can be measured (SPIM). Recent highlights of our research are the achievement of submicrometre resolution, the increase in the sensitivity of SPIM using organic, self-assembled monolayers as insulators and quantitative impedance imaging of polyelectrolyte microcapsules with high resolution.  Further information 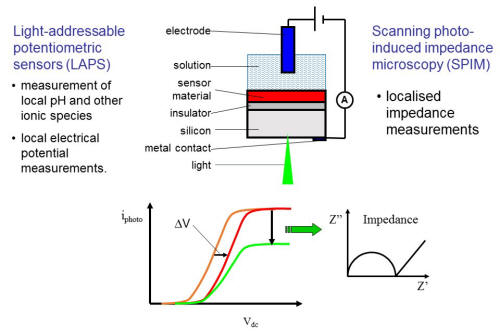