Andy Lewis presented the Gold Medal by the IOM3 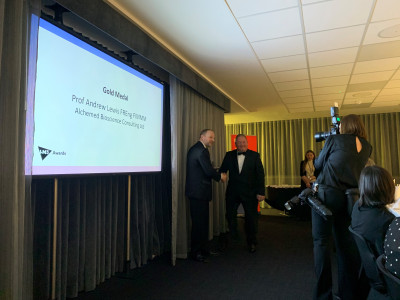 Andy Lewis being Presented with the Gold Medal

Prof Andy Lewis was presented with the Gold Medal at an Awards Ceremony at the IOM3 on the 8th December 2022. The Gold Medal is awarded for significant contribution to the industrial application of materials. The award was given in recognition of Andy’s work developing novel drug-device combination products for use in interventional therapies, such as the treatment of cardiovascular disease and cancer, as well as medical devices and drug and vaccine delivery technologies. During his career, Andy has collaborated extensively with academic institutions and is currently a Royal Academy of Engineering Visiting Professor in SEMS.

SEMS is delighted to note that Andy was one of several members of the materials community at QMUL recognised at the IOM3 awards ceremonies this year. James Busfield (Deputy Head of School) commented “It was amazing that Andy and the others were all being recognised this year and that reflects the strength of the materials research in SEMS.”