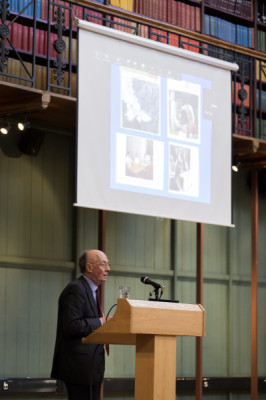 Professor Bill Bonfield FRS FREng FMedSci, second Head of Materials showing some of the materials developed by Materials at Queen Mary, including HAPEX used in over 500,000 patients worldwide

Some attendees at Materials50 including 20 of the first cohort of Materials graduates from QMES.

50 years of Materials graduates from the Mile End Campus in London and the first cohort from Queen Mary Engineering School (QMES) at our campus at Northwestern Polytechnic University in Xi’an China were celebrated on Friday 5th November.

120 people gathered in the Octagon with another 45 people on-line to celebrate. We had four of the first dozen PhD graduates: Peter Reed, Tony Kinloch, Brian Reeve and Geoffrey Levy in person with another one of their contempories on line. At the other end of our list of graduates, 20 of the QMES 2021 graduates who are studying now MScs in the UK attended.

After a Welcome by Andrew Livingston FREng, Vice Principal (Research), three sessions of talks started with former Heads of Materials. Edgar Andrews, the founding Head of Materials, gave a video presentation. Bill Bonfield FRS FREng FMedSci, Peter Reed and Paul Hogg reviewing the events and developments of their time in Materials. Andy Bushby talked about his career from Undergraduate to Professor and Vice Dean at QMES.

The second session allowed four former students and staff to talk about their work since they left Queen Mary. Tony Kinloch FRS FREng and Bob Young FRS FREng represented the earlier cohorts of students and former staff discussing adhesion and polymers and their engineering applications. Rob Neumann and Sophie Parsons, who did both their undergraduate and PhD degrees in Materials covered their industrial experience in Formula1 and forensic engineering in the shipping industry. Ioannis Spanoudakis, CEO of Athens 2004 Olympic Games and PhD graduate appeared on video.

The final session featured four current members of staff; Karin Hing, Ana Sobrido and Joe Briscoe talked about their current research and plans for the future, while Sir Colin Humphreys FRS FREng looked forward from the next 50 years, covering where and how Materials can alter the world from green energy generation and storage, recyclable materials to biomaterials. Liz Tanner FRSE FREng, current Head of Materials, thanked the speakers and attendees. The day ended with drinks, then dinner in the SCR.

For more information please visit the Materials50 web pages where you'll find interviews with former "Heads of Materials", some history of Materials at Queen Mary and details on QM developed materials which have been commercialised, along with pictures of the day.