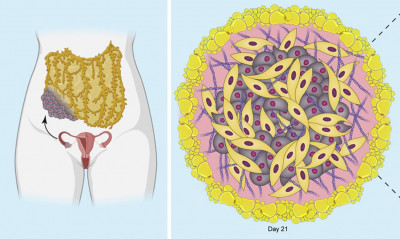 We have recently published two new papers in the journal iScience, which describe the development of novel multi-cellular in vitro models of ovarian cancer and the use of these models to better understand this disease. The work stems from a major European Research Council grant, CANBUILD, which was led by Prof Fran Balkwill, at Barts Cancer Institute.

Dr Robin Delaine-Smith, working as a research assistant in Prof Martin Knight's group led the development of the in vitro models, biomechanics testing and helped elucidate some of the signalling pathways regulating the tumour microenvironment and cancer progression.

The first paper, entitled 'Modelling TGFβR and Hh pathway regulation of prognostic matrisome molecules in ovarian cancer' describes how six extracellular matrix molecules found in tumour biopsies are associates with poor prognosis and how the production of these molecules is reproduced in a novel tri-culture in vitro model. The study then showed that this matrix phenotype is mediated by cross talk between the TGF-β and Hedgehog signalling pathways helping to understand disease progression. The paper concludes that the new tri-culture model reproduces key features of omental metastases and allows study of diseased-associated ECM.