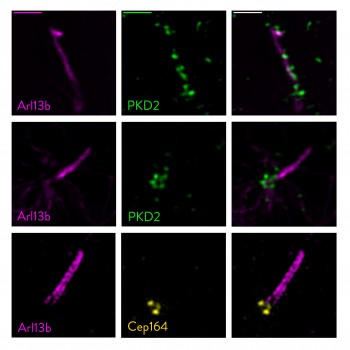 Super resolution microscopy images of polycystin-2 and primary cilia
Autosomal Dominant Polycystic Kidney Disease (ADPKD) is a common yet devastating disease. It is a heritable disorder characterised by development of kidney cysts which slowly overtake the kidney’s structure, destroying its function, and often resulting complete kidney failure by the of age 60. ADPKD affects as many as 1 in 400 people worldwide.

It is mutations in the genes PKD1 and PKD2 that cause ADPKD. PKD2 encodes an essential Calcium channel that localises to the cilium in the kidney tubules, the tube-like structures that make up the kidney, as well as other locations within these cells.

The cilium is a small hair-like extension that extends from the surface of cells and one is present on most, but not all cell types. Cilia are important for patterning the embryo as it develops and for many processes in the adult, including the prevention of kidney cyst formation. This very small compartment (the cilium is about 1/10,000th of the volume of a cell) is involved in many processes, including cell-cell signalling, mechanosensation (interpreting mechanical stimuli for the cell) and sight.

The question of where a protein localises in a cell can be very important for how or even if it functions. PC1 and PC2, the proteins encoded by the PKD1 and PKD2 genes, sit in the membranes of kidney cells; specifically the plasma membrane that surrounds the cell, the endoplasmic reticulum’s membranes, and the membrane of the cilium. While studies from 10 or more years ago had suggested that PC1 and PC2 localisation to the cilium is important for preventing ADPKD, a number of recent studies have questioned this. It has proved difficult to directly test this as loss of the PKD1 or PKD2 genes removes all PC1 or PC2 function from the cell.

By analysing the lrm4 mutation in PC2, Prof Norris's research team at MRC Harwell have been able to specifically examine the effect of removing PC2 protein from the cilium. Their results strongly support the idea that PC2 is specifically required in the cilium to prevent ADPKD.

Using super-resolution microscopy in collaboration with Prof Knight at Queen Mary University of London, the authors revealed that the mutant protein becomes stuck at the base of the cilium in a structure that is also present in normal cells. They suggest that this represents a previously undescribed site where PC2 protein docks before it enters the cilium.

This new study suggest that PC2 localisation to the cilium is necessary to prevent PKD.