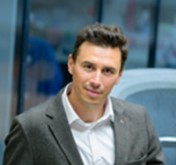 The forefront of the gastrointestinal mucosa consists mainly of a continuous polarised epithelial monolayer, protected by mucus. This strong defence barrier can be colonized by pathogens arousing a chronic inflammatory state. This exceptional colonization ability is associated with an increased risk of developing adenocarcinomas at the sites of infection. We have regenerated organoids and we have developed a new functional epithelial monolayer culture called “mucosoids”. The mucosoids are human multi-lineage stem-cell based in-vitro equivalent of a real mucosa. They mimic the function of a homeostatic epithelial barrier including accumulation of mucus on the apical side. Use of human mucosoid cultures reveals novel insight into epithelial homeostasis and response to bacterial infections.

Dr. Francesco Boccellato studied at “Sapienza” University of Rome. Since he was a student he was interested in the impact of pathogens in causing cancer in humans. During his PhD in Rome he studied the role of the Epstein Barr virus (EBV) in deregulating microRNAs in diffuse large B cell lymphomas. After his PhD, Francesco moved to Berlin, at the Max Planck Institute for Infection Biology, were he started being interested in the causality of bacterial infection in human cancers. To study the impact of infection on healthy epithelial barriers Francesco invented a new cultivation systems for healthy epithelial cells called the mucosoids. The mucosoids are monolayer of polarised epithelial cells that recapitulate all the functions of an epithelial barrier in the body, including mucus production. Francesco has recently started his independent group in the University of Oxford (UK), at the Ludwig Institute for Cancer Research. https://www.ludwig.ox.ac.uk/team/francesco-boccellato