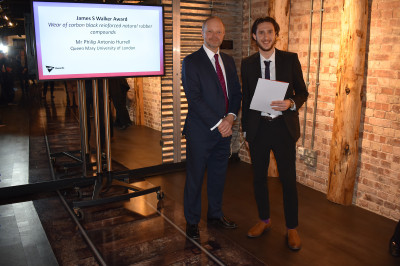 Philip Hurrell, a MSc graduate Materials Research in SEMS from 2021, has been presented with the 2022 James S Walker Award from IOM3 for his MSc project on "Wear of carbon black reinforced natural rubber compounds" at an Awards Ceremony on the 8th December 2022.

This national award and £450 prize, is presented by IOM3 to the best examined UK student project in the field of polymers. The project was supervised by James Busfield, who commented that Philip did a great project last year and fully deserves this recognition for all his hard work. His project collaborated extensively with SEMS PhD student, William Kyei-Manu. After graduation Philip has been working as a design and project engineer for L3Harris in Brighton. James also commented that this was the second consecutive time that a SEMS graduate has won this award with Philip following Mohammed Deera in 2021. He was also one of 6 staff and students who were recognised at the awards this year, reflecting the depth and strength of the materials research at QMUL.