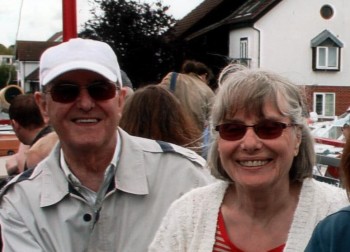 Ralph and his wife Valmai on a recent boat trip.
It is with great sadness that we report the passing of Dr Ralph Stevens. Ralph arrived to Queen Mary in 1964 as a lecturer in The Department of Mechanical Engineering, from where he went on to help establish the Materials Department. Prof Bill Bonfield (former Head of Materials) notes that, “Ralph gave distinguished service to QMUL over several decades as a founder and key member of the Materials Department.” He played many significant management roles such as Director of Studies and Senior Tutor in the Materials Department throughout a long and distinguished career. Ralph wrote and gave rigorous and original lecture courses that he regularly passed on to others. Many of which carry on in an updated form today. Ralph was a great personal tutor to students; even when his back gave up he was known to lie down on the floor of his office during tutorials. Ralph was always supportive of other staff and gave real help and guidance. On college committees he gave considered and wise advice which was typically then adopted.

He and Craig Davies (former Head of Materials) were not only best friends but a significant research force together. They collaborated largely on high temperature materials. Ralph provided the ideas and the scientific and mathematical rigour. Craig provided the funding and project drive. The competitive funding came from EPSRC, EU, MOD and a range of industrial companies. Their work is widely cited and is well known worldwide.

Paul Hogg (former Head of Materials) recalls a particular characteristic for Ralph that will resonate for those who knew him, “Whilst playing squash, whenever he made a mistake such as by missing a shot, he would exclaim "GOLLY GOSH!”. He was a one off."

Ralph passed away over the last weekend from a suspected Covid19 infection. Ralph had been living in a residential home for the last year. There are undoubtedly many former students and colleagues who have much to thank Ralph for and who like us will be very sorry to hear this sad news. Our thoughts at QMUL are will Ralph's wife Valmai and his two daughters Ceri and Sian at this difficult time.