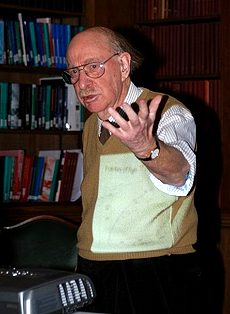 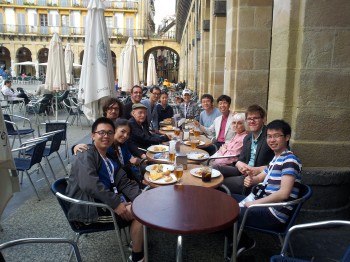 Alan (4th on the left) with the QMUL team at ECCMR in Spain in 2013 together with Pat (3rd on the right)
It is with great sadness that I report the passing of Prof Alan Thomas (1927 – 2019). Prof Thomas was one of the world’s leading rubber physicists. His career started as a Physics graduate from Brasenose College at Oxford University from where he moved into a position working for the British Rubber Producer’s Research Association (BRPRA) in 1948, where he worked until “retiring” in 1987. In addition, from 1974 he made an enduring contribution as a Visiting Professor at Queen Mary University of London.

His first task as a young graduate was to check the proofs of LRG Treloar’s "The Physics of Rubber Elasticity" (published 1949) which, he said, was the perfect grounding for his career. He was assigned to work on the strength of rubber under Ronald Rivlin, who suggested he could start by checking the applicability of the Griffith energetics approach to rubber. Contrary to Rivlin’s expectation, it turned out that this fracture mechanics approach could be generalised and applied to rubber, providing a unifying measure of the material's toughness. This was published in a seminal paper with Rivlin entitled “Rupture of Rubber” in the Journal of Polymer Science in 1953. This was the start of Alan’s stellar career as one of the world’s leading authorities on rubber physics. I was greatly honoured to be invited to contribute in 2003 at a seminar on rubber fracture entitled “50 Not Out” at TARRC, as BRPRA had become, where both Ronald Rivlin & Alan Thomas gave presentations.

But Alan’s interests extended much broader than fracture and included for example the mechanics of rubber-metal laminates (for which his work resulted in his employers receiving in 1990 the Prince Philip Award for Polymers in the Service of Mankind) for the development of rubber-steel laminated earthquake isolation bearings. Alan also worked on abrasion, friction, filler reinforcement, migration of soluble materials, non-linear and finite strain elasticity and visco-elasticity. He could easily become intrigued by any issue that he felt might be amenable to a quantitative theoretical treatment. He famously sketched out his ideas as soon as they came to him. Countless QMUL students over the years have had their entire thesis idea mapped out over lunch in Alan’s tiny scrawling handwriting on the back of a napkin. Many students still have these as keepsakes to remind them of their time here and the haphazard way that rubber science was advanced under Alan’s tutelage. Alan also had an encyclopedic knowledge of the literature and would often help researchers by pointing out that some luminary had already done the experiments they were planning perhaps several decades earlier. He also had an enviable ability to assess rapidly whether a new idea or research paper provided any insight or not.

I encountered Alan for the first time nearly three decades ago. I was at the time a Teaching Company Fellow working for a rubber company trying to design rubber components using computational modelling techniques. For some reason, he took a shine to me and was an unwavering mentor for the rest of his life. He inspired me to undertake a part time PhD and encouraged me to apply to be a lecturer here at QMUL in 1994. I have traveled the world with him attending conferences and we have published more than 40 papers together. Over my time, he has supported more than 50 research students and many more who predate this. The reputation of QMUL has been hugely enhanced by our association with Alan.

He won many awards for his work, including the Colwyn Medal, the Charles Goodyear Medal, the MRRDB Gold Medal and the KMN award from the Malaysian government in 1976. We also made him an Honorary Fellow of QMUL in 2002.

To quote Prof Craig Davies, the former head of materials at QMUL from 1992 until 2000 and another long-time collaborator, “Alan was one of the brightest but down to earth guys that I have known, who made an immense contribution to the science and technology of elastomers. Alan taught countless students how to really apply the scientific method to great effect. His published work will live for ever.”

Alan's life in physics was reflected in other ways. He was immensely proud that both his son Graham and three grandsons Philip, Robin and Carl were all active in physics and it is notable that Alan also met Pat, his second wife at an IOP meeting, after his first wife Yvonne had passed away. Alan was not just interested in Physics but also had a passion for music and the arts and was immensely proud of his daughter, Jennet, who is an artist.

Alan will be fondly remembered by all of those at QMUL whom he encountered and he will be sorely missed. A celebration of his life will take place on Tuesday 14th May at 2pm at Woollensbrook Crematorium, Hertford Road, Hoddesdon, Herts, EN11 9BN. Family flowers only but donations to charity via www.burgessfunerals.co.uk. The charities chosen are Age UK, Royal National Lifeboats and St John Ambulance-Hertfordshire. There will be refreshments to follow at the Red Lion in Hatfield. If you plan to attend then please email me, so that I can advise the family of numbers.