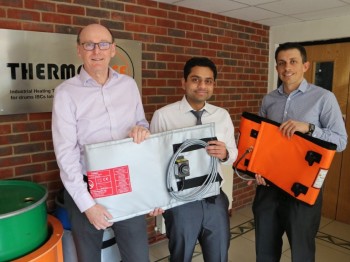 From let to right: Mark Newton (Managing Director, LMK), Dr Harshit Porwal & Jamie Evans (Development Manager, LMK) holding innovative products developed during the KTP.
The Knowledge Transfer Network (KTN) has announced that the recently completed Knowledge Transfer Partnership (KTP) between LMK Thermosafe Ltd and QMUL has been shortlisted for their Exceptional Engineering Excellence Award. The research associate during the KTP was Dr Harshit Porwal, who now works for the company as a Business Unit Manager. The company are commercialising safe electrical heaters made from the materials developed during the KTP. The project was supervised by Dr Emiliano Bilotti and Prof James Busfield both from SEMS at QMUL and led to two patents, several high impact journal papers including one in Advanced Functional Materials and was supported by two further PhD student projects. The eventual winner will be announced from a shortlist of just three at an Awards Ceremony on 2nd May 2019 at the Royal Society of Chemistry.