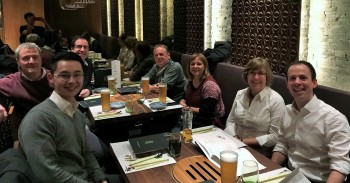 Prof. Ton with colleagues celebrating his 20 year contribution to SEMS
After nearly 20 years of great service to QMUL, we announce that Prof. Ton Peijs will be leaving SEMS for a new role at Warwick University in January 2019. Ton has been an inspirational research leader in SEMS, not only evidenced through his research group which has clearly had a significant impact in polymers and composites but also during his time as Director of Research. In this role Ton has helped oversee the last two REF submissions in SEMS, which helped cement our position as a world leading research group. In addition, Ton has also had research leadership roles in Nanoforce Ltd and the MRI. Ton has also been a great educationalist with his pioneering teaching including his vital contribution to the establishment of Problem Based Learning in Materials at QMUL. We hope that he will still visit us regularly around home matches at his beloved West Ham