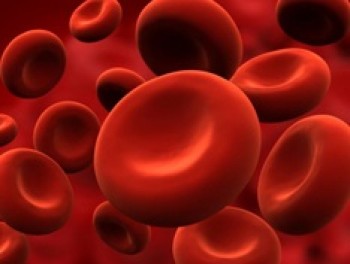 Schematic illustration of red blood cells
Prof Williams and colleagues in the School of Engineering and Materials Science at Queen Mary, have developed the world’s most precise computer simulation of how red blood cells might travel around the body to help doctors treat people with serious circulatory problems.

Red blood cells have the important task of carrying oxygen around the body but make up less than half of the total blood volume – 45 per cent in men and 40 per cent in women.

Understanding how damaged red blood cells might interact with each other or their neighbouring cells could be useful in realising blood flow in patients who are diabetic or have had surgery to address circulation complications, such as stents or artificial hearts.

The simulations, the largest of their kind, take into account the many forces acting on red blood cells as they travel through the blood vessels, which affect how the cells interact and stick to each other. The data gathered for the various flow situations in the simulation match the data gathered from experiments very closely.

John Williams, Professor of Computational Fluid Dynamics at the School of Engineering and Materials Science, said: “At the moment it’s difficult to visualise how red blood cells travel through the body as they are very small and hard to track through enclosed vessels such as arteries and the heart. Our research will help medical professionals to visualise the cells movement, interaction, deformation and adhesion in three dimensions.

“This could help doctors in understanding which areas of the body are being starved of oxygen in patients who have had heart surgery, for example.”

Professor Williams added: “Because of the enormous number of cells involved, we need vast supercomputer resources now in order to carry out a simulation of the flow of both damaged and undamaged red blood cells through a stent to study the effects on the cells.”

The research is published in the Journal of Biomechanics.