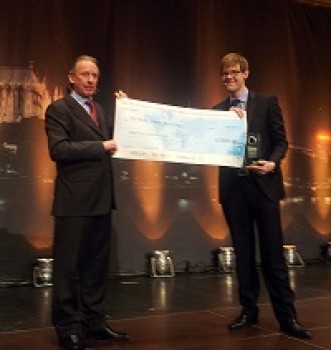 Lewis receiving his trophy and a cheque.
Lewis Tunnicliffe, a PhD student in SEMS, was awarded the Best Young Scientist Award at the Tiretechnology Gala Dinner. The annual dinner is attended by more than 600 people and is considered to be something like the 'Oscars' for the tyre industry. Lewis won the prize for his pioneering work on understanding the viscoelastic behaviour of rubber at small strain. The aim being to understand how rubber composites perform in tyre applications, so that they can be optimised to reduce fuel consumption. His supervisor James Busfield said that he fully merited the prize for his excellent experiential contribution and detailed analysis.