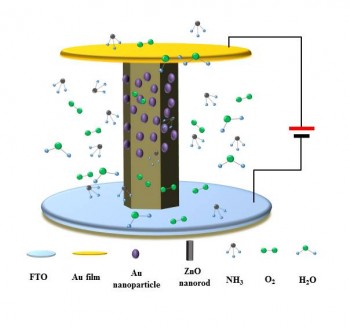 The ammonia sensor is based on a vertical diode structure formed from zinc oxide nanorods and a gold contact deposited by thermal evaporation.

Ying Tu's paper describing a novel room temperature sensor for ammonia has been accepted by ACS Sensors. As ammonia is gaining importance in the production and storage of hydrogen, there is an increasing demand for energy-efficient ammonia detectors. The device described in this paper boasts low power consumption, good sensitivity to ammonia at room temperature and a simple fabrication method.