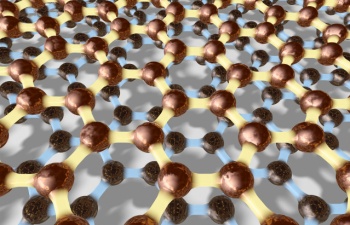 New study reveals unexpected softness of bilayer graphene. Credit: theasis/ iStock.com
In the study, published in the journal Physical Review B, the researchers showed that bilayer graphene, consisting of two layers of graphene, was noticeably softer than both two-dimensional (2D) graphene and three-dimensional (3D) graphite along the stacking direction.

This surprising result differs from previous research which showed that 2D graphene, a flat single layer of carbon atoms arranged in a honeycomb structure had many of the same mechanical properties as 3D graphite, which is a naturally occurring form of carbon made up from a very weak stack of many layers of graphene.

Graphene is a 2D material, but has 3D properties such as its stiffness in the ‘out-of-plane’ direction, perpendicular to the plane of the graphene sheets.

The behaviour of π electrons within multilayer graphene determine its out-of-plane stiffness. In this study, the researchers found that when bilayer graphene is compressed out-of-plane, some ? electrons are ‘squeezed’ through the graphene planes, which are impenetrable to small molecules such as water. This response makes the material softer and much easier to compress.

Dr Yiwei Sun, lead author of the study from Queen Mary University of London, said: “Our previous study showed that 2D graphene and 3D graphite have many of the same mechanical properties, so we were surprised to see that bilayer graphene is much softer than both of these materials. We think that the softness of bilayer graphene results from the ‘squeezing’ of pi-electronic orbitals through the graphene layers. For example, if the bread on a burger is replaced by a bagel it is even easier to compress because the contents can be squeezed out of the bagel hole.”

Often hailed as a 'wonder material', graphene has the highest known thermal and electrical conductivity and is stronger than steel, as well as being light, flexible and transparent.

It was discovered in 2004 by peeling off graphene flakes from bulk graphite (used in pencil leads and lubricants) using sticky tape.

Stacking the graphene flakes one on top of the other provides more possibilities as the material’s extraordinary properties are determined by interactions between its stacked layers. Its unique characteristics can also be fine-tuned for various applications by stacking other 2D materials, such as boron nitride and molybdenum disulphide, to graphene.

This study provides insight into the complex interactions between graphene bilayers and enables quantification of its properties, which is critical for exploring future applications of the material in devices such as vertical transistors and pressure sensors.