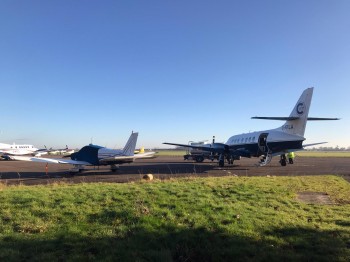 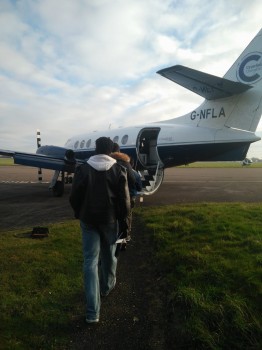 A group of our third year Aerospace engineering students recently took a short flight test course as part of our annual visit to Cranfield University.
The course demonstrated performance and handling qualities of a real aircraft flight. They flew on a British Aerospace Jetstream Aircraft Series 31 turbo-prop, taking the role of a flight test engineer. Estimating the aerodynamic properties of the aircraft and establishing the accuracy of some of the on-board navigation systems.
The flight test course comprised of two activities to understand different modes of oscillation and aircraft stability. These are known as longitudinal and lateral motions. In the first flight, students experienced a calm and steady flight mode whilst examining the aircraft drag characteristics. It was a typical flight that gave the students a feel of the plane and a chance to enjoy the panoramic view of the beautiful country side. The second flight, included some extreme manoeuvre tests such as the Phugoid and Dutch roll. It also gave the students a real feeling of getting close to stall mid-flight. It brought to life all the flight manoeuvres taught in class as part of the Stability and Control of aircraft module.

The students had also a physical experience with the longitudinal motion and the modes associated with it such as the short period oscillation and the Phugoid motion. With the first mode the aircraft stabilised itself with a sudden incoming gust. The other mode, is dominant over a long range of distance; and was experienced over a longer time. The students also experienced three modes of lateral stability, the roll subsidence, the spiral mode and the Dutch roll. The Roll subsidence and spiral mode are non-oscillatory lateral modes of aircraft while the Dutch roll is an oscillatory lateral mode. the stability of each mode is crucial for a steady aircraft flight. In each of these modes; the aircraft balances itself with lateral flight control surfaces such as rudder, flaps and aileron. The most interesting of the lateral mode was the spiral mode, which felt as free-fall of the aircraft in helical motion. Student experienced extreme g-force up to 2g. (which is like experiencing the pull of twice your own body weight).

The flights marvelled the students and gave them a first-hand experience in understanding the safety considerations made by engineers in the designing phases of the aircrafts to maintain their stability. All of this while enjoying what can only be described as the most thrilling flights.