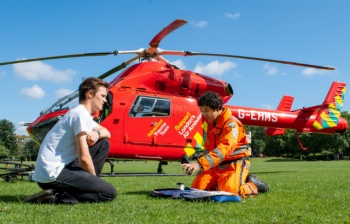 Hal (left) and Samy (right) demonstrating the REBOA kit. Credit: Hal Dubuisson
A Queen Mary design student has designed a new medical kit during his studies, to be deployed across the city by life-saving medical charity London’s Air Ambulance.

Hal Dubuisson, who graduated with first class honours in Design, Innovation and Creative Engineering, has designed a new medical kit, which will be used by London’s Air Ambulance to carry equipment required for the life-saving REBOA (Resuscitative Endovascular Balloon Occlusion of the Aorta) procedure.

Only performed by the most skilled

Each year thousands die after being severely injured due to uncontrolled bleeding. REBOA is a damage control procedure, in which a miniature balloon is inflated stopping blood loss via injuries sustained and still allowing blood to flow to vital organs. It is minimally invasive, yet highly intricate and can only be performed by the most skilled doctors and paramedics.

London's Air Ambulance were the first team in the world to perform REBOA out of hospital, often in environments that are complex, austere and unpredictable. After monitoring London’s Air Ambulance’s REBOA training programme during his studies at Queen Mary University of London, Hal identified the way the equipment is transported and presented to paramedics is currently having a negative impact on the success of the procedure.

These findings informed Hal’s concept for a newly designed REBOA kit to be used by London’s Air Ambulance in the field. His design is based on the layout of a book, intuitively guiding the user to the next piece of equipment, and allowing them to focus on the patient rather than rummaging for the correct piece and dealing with waste build up. This concept reduces stress and saves crucial time when performing the REBOA procedure.

Hal, of the School of Engineering and Materials Science, said: “The London Air Ambulance team are some of the best doctors and paramedics in the world, who perform incredibly tricky procedures in the harshest conditions. Their current REBOA kit is letting them down and I saw this as an opportunity for ‘user-centred design’ to improve their ability to carry out life-saving treatment.“

Can be used in all types of environments

The layout of the kit simplifies the performance of REBOA by presenting equipment in a logical order and integrating instructions into the design. With secure equipment storage, durability, and a reduction in on-site waste, the kits can be used in all types of environments.