Making a splash is all in the angle 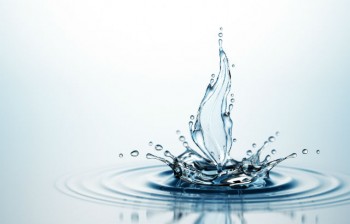 Making a splash depends on the angle of a liquid as it hits and moves along a surface, according to a new study from Queen Mary University of London.

If a droplet hits a dry solid surface fast enough it will splash and being able to predict a splash is necessary for a vast number of applications, from high-speed coating, inkjet printing, disease spreading, crop-spraying and soil erosion.

In this study, published in Physical Review Letters, the researchers looked at the ability of a surface to repel or attract a liquid and the role this plays in splashing.

They found that the angle formed by the moving front of a droplet as it spreads along a surface upon impact, known as the dynamic contact angle, provides information about whether a surface will splash or not. How much a surface attracts or repels a liquid is known as wettability – if it attracts it is a wetting surface and if it repels it is a non-wetting surface.

It is the first time the dynamic contact angle has been studied at high speeds and this new finding offers an extra piece of information that turns out to be crucial in predicting whether an impacting drop will splash or not.

Previously, it was understood that the angle of a liquid, formed by a static droplet on a surface, should be used to determine wettability but this study shows it is no longer relevant. Instead it is the dynamic contact angle that rules splashing.

A direct and simple application of this study is that splash-free coatings can be achieved by pre-treating the spraying surfaces to make them more wettable.

Dr Rafael Castrejon-Pita, lead author of the study from Queen Mary University of London, said: “Our paper demonstrates that the dynamic contact angle and the liquid characteristics determine whether a droplet will splash or not and we show that traditional methods to characterise splashing fail to separate the splashing behaviour between liquids.

“Given a certain impact speed, it will be easier to make a splash if a substrate is non-wettable rather than if it was wettable.”

The experiments consisted of taking high-speed videos to study whether a droplet spreads or splashes upon impact into surfaces with different wetting properties.

The study also covered a wide range of surfaces including wettable, hydrophobic, and superhydrophobic. In addition, the researchers used various liquids including water, ethanol and a solution of glycerol. Most previous studies were focused on a single liquid and a single surface.

The study was carried out in collaboration with Cardiff University and the University of Oxford.