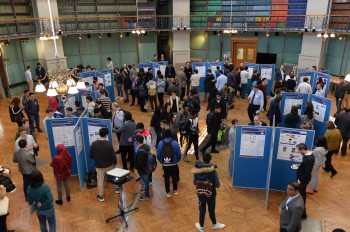 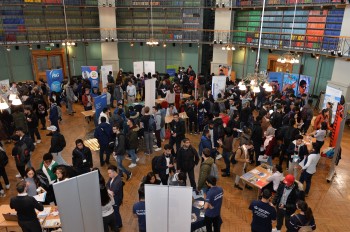 Industrial Liaison Forum Careers and Networking Fair
The biannual Industrial Liaison Forum was held on Wednesday November 14th in the Octagon. The event was well attended with over sixty industrialists from over forty organisations attending. The event was broken up into four parts, starting in the morning with the PhD research poster exhibition, followed by the annual SEMS Prize Day ceremony for the 2016-2017 academic year.

The afternoon consisted of five separate panel sessions, chaired by SEMS academic and support staff and made up of attending industrial participants, followed by a mini Careers Information and Networking Fair back in the Octagon. During the Fair Prof. James Busfield also led an Industrial Advisory Board meeting with the QMUL Business Development Team on the topic of Knowledge Transfer Partnerships (KTPs).

The PhD poster exhibition was of great interest to faculty, students and attending industrialists alike. Over 60 posters were displayed with three prizes awarded, sponsored by NGF Europe.

The annual SEMS Prize Day ceremony then followed with over twenty student prizes and nearly £5000 in prize money awarded. There were a number of multiple award recipients and all of the winners were honoured to have their prizes delivered by a number of industrial sponsors and the SEMS Head of School, John Stark.

In the afternoon five student facing panel sessions were held, attended by over 500 SEMS students. The sessions were chaired by SEMS academic and support staff and made up of leading industrialists. We were pleased to also include a number of our Industrial Advisory Board members during these sessions.

Finally the day was brought to a resoundingly successful completion with a Mini Careers Fair in the Octagon that attracted over 30 companies and 350 students.

The SEMS Industrial Liaison Forum has now been held twice a year for ten years and provides an opportunity for students, academics and industrial links to interact and further Queen Mary’s strong position and reputation within the engineering and materials science sectors.

The next Industrial Liaison Forum will again be held in the Octagon on 13 March 13 2019 and will be focused on current final year BEng and MEng projects and continuing to develop our industrial links with SEMS alumni.