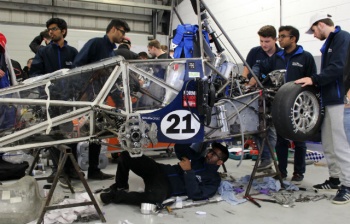 Students from Queen Mary University of London will be competing at Silverstone this week in the 2018 Formula Student, Europe's most established educational engineering competition.

Formula Student challenges universities from across the world to design, build and race a single-seater racing car in one year. The cars are then judged on their speed, acceleration and endurance, while the teams are tested on their design, costing and business presentation skills.

The Queen Mary Formula Student team will compete against 129 other teams from over 30 different countries. Last year the team won the Best Newcomer award.

With more than 20 different nationalities, the diverse team utilise specific skillsets from each team member to create a unique car.

Awais, a final year PhD student in biomechanical engineering, said: “One of the things I like the most about the team is its diversity, as it allows students from various nationalities and academic backgrounds, and at different stages in their degrees, to work towards a single common goal, and that in itself is exciting to be a part of.”

The project usually forms part of a degree-level project and is viewed by the motorsport industry as the standard for engineering graduates to meet, transitioning them from university to the workplace.

Paras, a third year accounting student, said his involvement in Queen Mary Formula Student has been invaluable in securing summer placements during his first two years.

He said: “It’s energising to work with highly motivated and creative individuals such as those found within the Formula Student Society, allowing me to further my interpersonal as well as accounting skills in a practical environment.”

The format of the event is such that it provides an ideal opportunity for the students to test, demonstrate and improve their capabilities to deliver a complex and integrated product in the demanding environment of a motorsport competition.

Formula Student is composed of eight challenges and events with a separate amount of points allocated for each. These events combine to give a total score of 1,000 points. The cars can go from 0-60mph in less than three seconds.

Ahmed, a second year Mechanical Engineering student, said: “Queen Mary Formula Student has allowed me to apply what I learned in lectures and in seminars in a real-life application. It helps me solidify this knowledge further in a safe and exciting environment.”

2018 marks the first year that there will be a driverless element to the competition. The new aspect of the competition ensures that Formula Student continues to support industry by addressing the skills gap and providing mechanical engineering students with the opportunity for real world experience of integrated electronics, software and systems engineering.

Andrew Deakin, Chairman of Formula Student, said: “The fact that we are introducing a new AI element this year is particularly exciting, as AI is already transforming so many industries, including the automotive sector.

This new, exciting element to the competition aims to encourage enterprising students to look to the future by designing the software for a fully autonomous Formula One-style vehicle in a safe environment.”