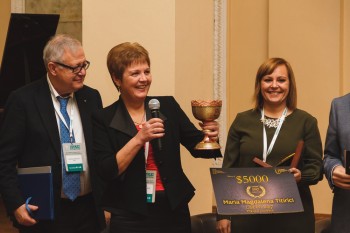 Professor Magdalena Titirici receiving her award
Professor Magdalena Titirici, was honourably introduced as the third female USERN laureate. The Universal Scientific Education and Research Network (USERN) was inaugurated in 2015 as an independent organisation with the main purpose of peaceful and humanitarian promotion of education and research, universally. The USERN prize is an international award, established by the USERN, annually awarded to a researcher no more than 40 years of age for novel advancement or achievement in scientific education, research, or serving humanity in five scientific fields including medical sciences, life sciences, formal sciences, physical sciences, and social sciences.

Professor Magdalena Titirici, Professor in Sustainable Materials Chemistry, leads her group of young researchers at the Titirici Group. She had proposed "The design of efficient and low cost electrocatalysts without the use of critical metals" for her USERN prize application, which turned out to be the best in the most competitive USERN prize field, with 51 shortlisted applicants for the USERN Physical Prize.