Dr Hasan Shaheed shortlisted for the Engagement and Enterprise Awards 2016 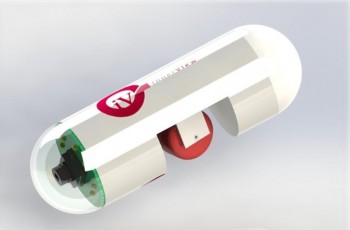 Simulated image of the prototype
Dr Shaheed has been selected as a finalist in the category of Proof of Concept at the Engagement and Enterprise Awards 2016. As a finalist he has been invited to the ceremony on Tuesday 7th February 2017, taking place in the Octagon, QMUL. Hasan was nominated alongside his co-applicant Mr Mo Thaha, a bowel cancer surgeon from SMD, Blizard institute, QMUL.

The team have been nominated for developing a novel locomotion system for a robotic active capsule endoscope (CE). The team has been working since 2012 and developed a prototype which when steered through a phantom colon, achieved speeds faster than existing CE.
In 2015/16, following a further comprehensive ‘freedom to operate’ and patent search QMI contracted ‘patent & trademark attorneys, gave a satisfactory opinion and now the team is preparing for a patent application.

In 2016, the team agreed to collaborate with a British SME industry partner, ‘ORP plc’ to further develop and test the platform locomotion technology. The team is preparing to bid for the NIHR i4i product development award in summer 2017 aiming to develop a pre-CE marked device and conduct a first in human feasibility and safety clinical studies.