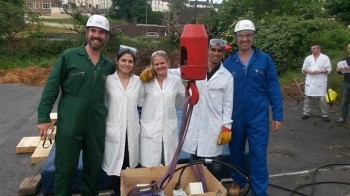 SEMS staff with the presenters of Operation Ouch!
Over the summer, SEMS staff helped film an episode of the award winning CBBC show “Operation Ouch!” The episode investigates just how amazingly strong tendons are. The team had great fun performing the experiments, you can see the episode on Monday 31st October at 5pm. You can also catch up with it on the BBC iPlayer.