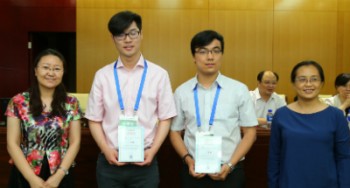 The 2016 Beijing Overseas Talents Entrepreneurship Competition is organised by Beijing Overseas Talents Center, aiming at finding overseas talents and excellent projects from all over the world which can be built into products and which have great commercial potential. The center hopes that these individuals will build companies in Beijing, and as a result, the Beijing government will offer some investments and services.

Last month, Xingchen Zhang and his team won the champion of UK division in University of Oxford by beating teams including those from the University of Oxford and Imperial College London. At the final, there were 16 teams from all over the world including USA, France, Portugal, Australia, United Kingdom, Singapore etc.

Following a 5 minutes presentation with questions from the judges, who are all investors and successful entrepreneurs in Beijing, Xingchen Zhang's team was ranked 2nd place. What's more, after the presentation, five invitations from venture capital were sent to Xingchen for further discussing.

Xingchen and his team will continue to work on this project, and Xingchen plans to start a company after finishing his PhD study.