SET for Britain Exhibition of posters by early-career research scientists, engineers and mathematicians 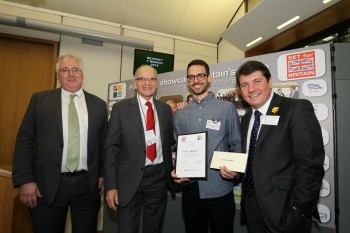 2016 SET for Britain Bronze Award Winner Nikolaos Papaioannou
The final of the 2016 SET for BRITAIN event took place on Monday, 7th March 2016, sponsored by Stephen Metcalfe MP, Chairman of the SET for BRITAIN organising group of the Parliamentary and Scientific Committee.

SET for BRITAIN exists to raise the profile of Britain's early-stage researchers at Westminster by engaging Members of both Houses of Parliament with current science, engineering and mathematics research being undertaken in the UK, especially that by their local constituents and in their local University. Few of them have science or technology degrees, but we usually have around 100 Parliamentarians attending during the day.

The SET for Britain Bronze Award went to Mr Nikolaos PAPAIOANNOU, School of Physics and Astronomy, Queen Mary University of London for his poster: FROM BIOWASTE TO FLUORESCENT QUANTUM DOTS. Nicolaos is supervised by Dr Andrei Sapelkin and Professor Magdalena Titirici.