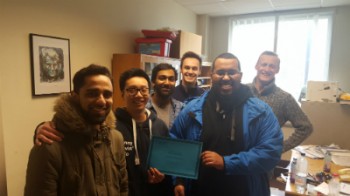 The students designed a portable wind turbine which could generate power to support infrastructure at refugee camps which are situated in Eastern Europe, specifically Turkey. The panel of judges were very impressed by the simplicity of the design and the potential of the device to be commericalised.

The project is supervised by Adam Sutcliffe and Nobuoki Ohtani