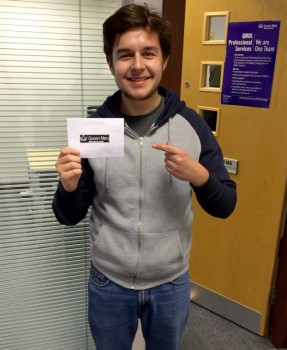 Omer chose to study at QMUL based on the reputation of the Aerospace Engineering programme and a recommendation from his older brother who studied Chemistry here.

Omer said "I had visited QMUL in the past where we managed to go into the Aerolabs and was very excited to see all the wind tunnels and different equipment. Now I will be able to use the wind tunnels which is pretty cool."

Following a gap year, Omer has found it challenging to adapt to full-time study again. But says that he is excited to be studying a subject, and furthering his knowledge, in something that he is passionate about.

The Applicants Survey give valuable information to the Schools in QMUL who are continuously striving to recruit the best and brightest students.

Well done once again Omer and thank you for completing the survey.