Student secures £11,500 in scholarships for his MSc 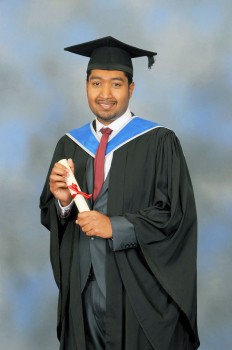 During his time as a student at SEMS, Nitish spent one year at GE Energy where he worked as a Manufacturing Engineer. He thoroughly enjoyed his time there and was involved in challenging projects which he says "made use of the knowledge I had gained at SEMS". Nitish was highly praised for his works at GE and based on how much he enjoyed the year in industry, decided to start an MSc in Mechanical Engineering.

As a result of his outstanding academic achievements, Nitish was automatically offered the QMUL Science and Engineering Excellence Award for international students which is valued at £5,000.

Being proactive, Nitish continued to search for other postgraduate scholarships and discovered one being offered by the Institute of Mechanical Engineers (IMechE). Following references from Nitish's tutors at SEMS, Nitish was called for an interview where he delivered a 30 minute presentation to a panel of engineers followed by a 45 minute interview.

Nitish described the process as "very challenging" but says that he managed to "stay calm and composed" at all times. One week later, Nitish received a letter inviting him to the awards ceremony and informing him he had received the full scholarship of £6,500.

Speaking of the experience, Nitish said "I am very delighted to have secured a scholarship from such a prestigious organisation and this will definitely motivate me to work harder for my MSc."