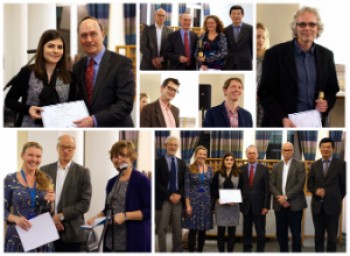 The Faculty of Science & Engineering Celebration Evening was held on Wednesday 14th January and saw six people from SEMS recognised for their efforts. Congratulations to those involved! The details of their awards are as follows:

• Jonathon Hills, Research Support Manager, was recognised for being a strong team player despite a broad role remit – from working on the School REF submission to supporting the PhD student population
• Crawford Blagden, Industrial Placement Manager received an award for working beyond the boundaries of his role in order to offer further support and opportunities to the students, including working on the personal development module established within the school
• Marta Godinho, 1st year PhD student with Dr Hazel Screen, was awarded the College’s inaugural Bonfield PhD scholarship
• Dr Karin Hing, Senior Lecturer in Biomaterials, was awarded the S&E Research Performance Award in recognition of her contribution to ApaTech and the subsequent REF impact case submission which was based on it
• Dr Jens Mueller, Senior Lecturer in Bio-Fluids, received the Research Performance Award 2015 in recognition of his outstanding achievement in research grants from the European Union
• Dr Hazel Screen, Reader in Biomedical Engineering, received an award in recognition of initiatives and hard work improving Engagement and Retention in SEMS